The man behind the scientist – 25 little-known Albert Einstein quotes on Fame, Love, Peace and Religion 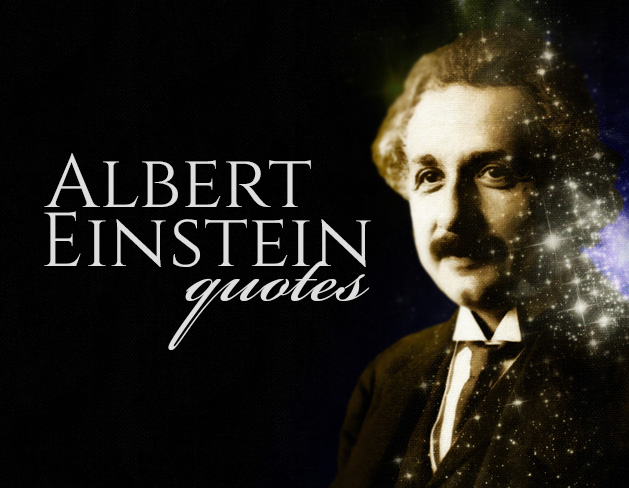 Isaac Newton in 17th century thought that space, matter and time are separate from each other. Over 200 years later Albert Einstein said that all three are closely related, or relative to each other. His groundbreaking theory of relativity earned him recognition in the scientific world, especially in the field of theoretical physics. Unfortunately, with scientific fame came the cult of celebrity that surrounded the great physicist where ever he went. He was soon worshiped by people around the globe that didn’t understand his physical ideas, but were mesmerised by his genius status. “Even Chaplin looks at me like I’m some kind of exotic creature and doesn’t know what to make of me. In my room he acted as if he were being brought into a temple, said Albert Einstein

referring to Charlie Chaplin. He never became entirely comfortable with his level of fame and didn’t want monuments to be built in his honor. “He had left behind specific instructions regarding his remains: cremate them, and scatter the ashes secretly in order to discourage idolaters,” writes Brian Burrell in his 2005 book, Postcards from the Brain Museum.

Although it is said almost everything that can be said about this one of the history’s most prominent scientist, his quotes, letters, notes and interviews reveal us his private thoughts about various topics that are valuable and worth reading even today. “A happy man is too satisfied with the present to think too much about the future,” wrote seventeen-year-old Albert Einstein for a school essay in French entitled “My Future Plans”, giving us the glimpse of a thinker he will one day become. Here is a small collection of his quotes about love, life, fame and religion for everyone to think about.

1. ON NEGATIVE ASPECTS OF FAME 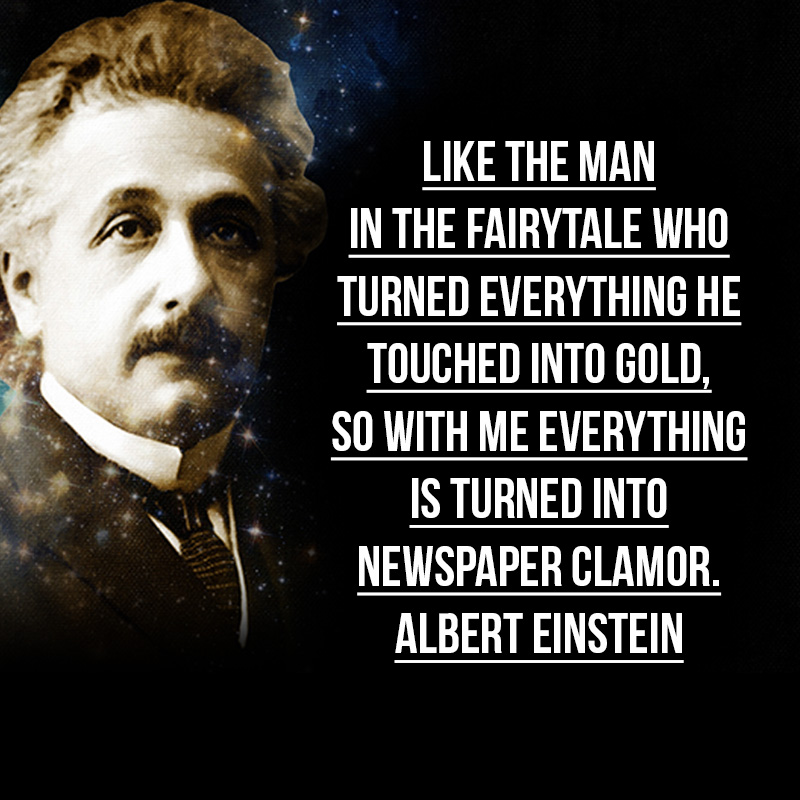 “Like the man in the fairytale who turned everything he touched into gold, so with me everything is turned into newspaper clamor.” – Albert Einstein

“I never think of the future. It comes soon enough.” – Albert Einstein

3. ON THE POWER OF IMAGINATION

“When I examine myself and my methods of thought, I come close to the conclusion that the gift of imagination has meant more to me than my talent for absorbing absolute knowledge.” – Albert Einstein 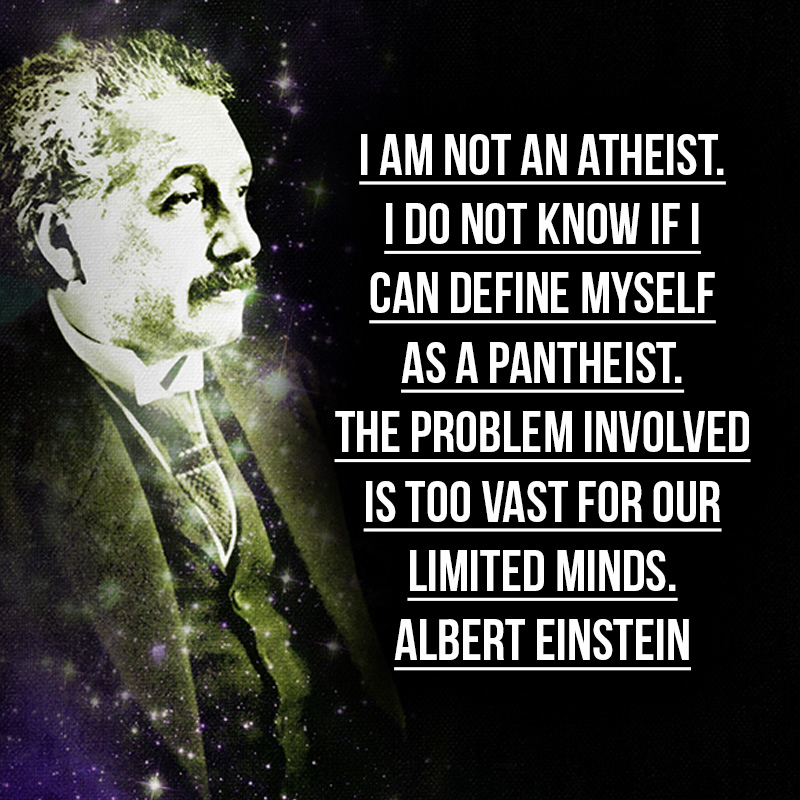 “I am not an atheist. I do not know if I can define myself as a pantheist. The problem involved is too vast for our limited minds.” – Albert Einstein

“I’ve been so preoccupied with what would happen in the event of my death that I’m surprised to find myself still alive.” – Albert Einstein

6. ON CURIOSITY AND TALENTS 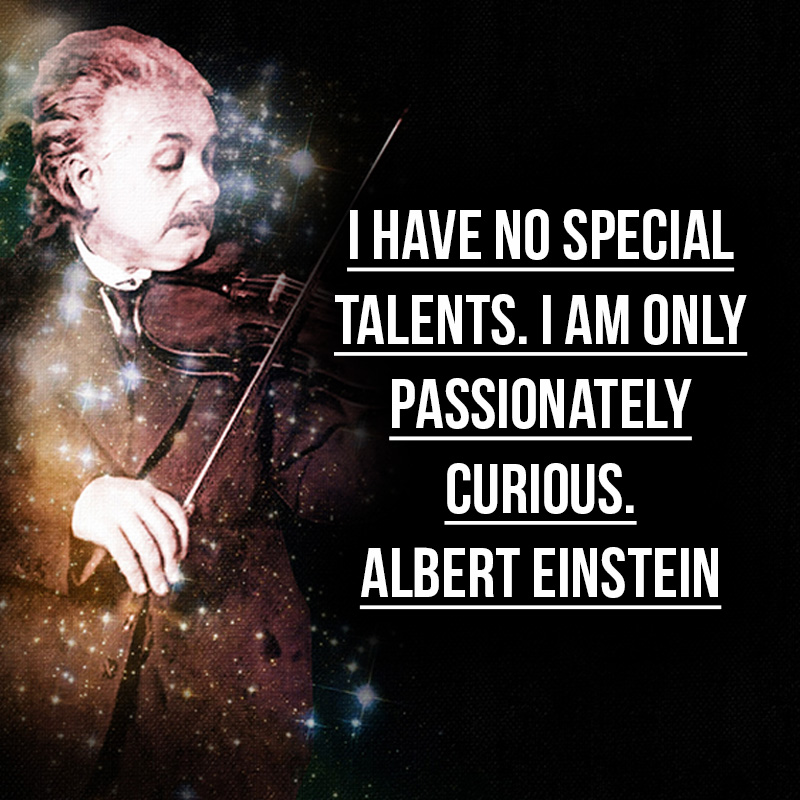 “I have no special talents. I am only passionately curious.” – Albert Einstein

“I’m like a run-down old car—something is wrong in every corner. But life is still worthwhile as long as I can still work.” – Albert Einstein

“This life is not such that we ought to complain when it comes to an end for us or for a loved one; rather, we may look back in satisfaction when it has been bravely and honourably withstood.” – Albert Einstein

“Only a life lived for others is a life worthwhile.” – Albert Einstein

“A life directed chiefly toward the fulfillment of personal desires will sooner or later always lead to bitter disappointment.” – Albert Einstein 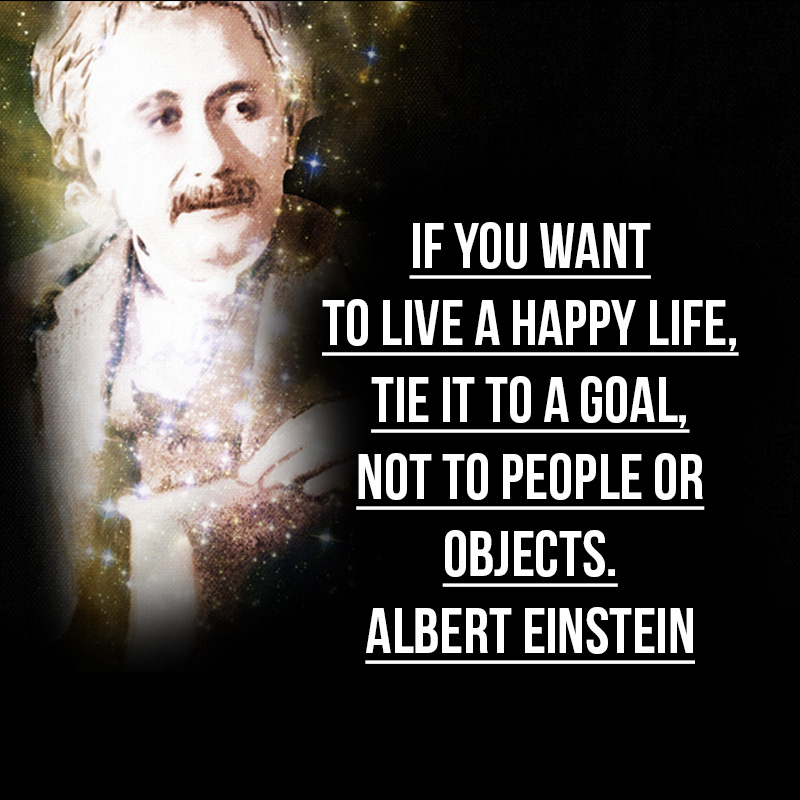 “If you want to live a happy life, tie it to a goal, not to people or objects.” – Albert Einstein

“The important thing is not to stop questioning. Curiosity has its own reason for existing. One cannot help but be in awe when one contemplates the mysteries of eternity, of life, of the marvellous structure of reality. It is enough if one tries to comprehend only a little of this mystery every day.” – Albert Einstein 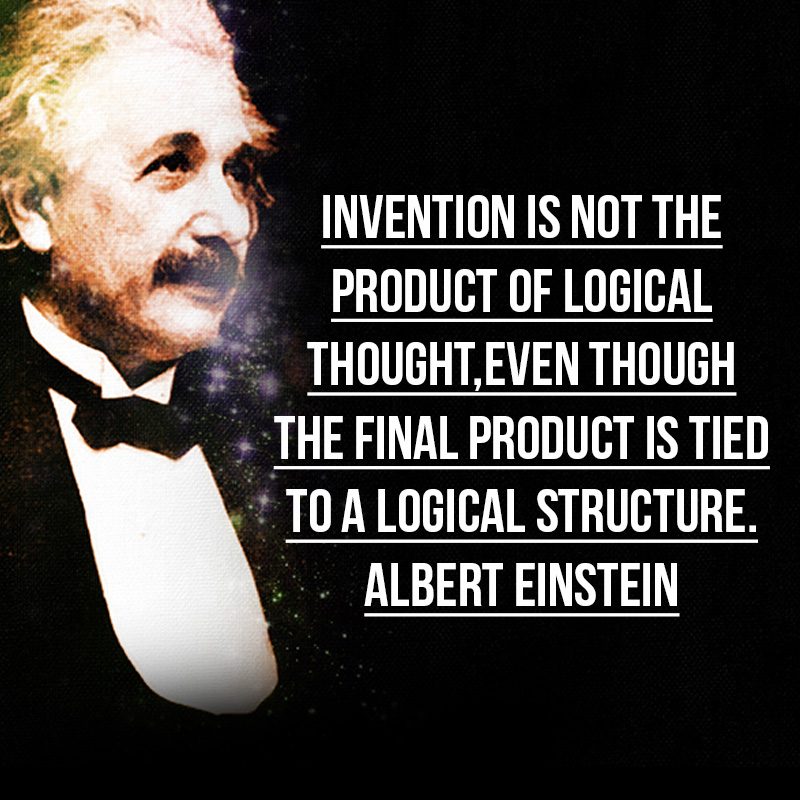 “Invention is not the product of logical thought,even though the final product is tied to a logical structure.” – Albert Einstein

“Human beings can attain a worthy and harmonious life only if they are able to rid themselves, within the limits of human nature, of striving to fulfill wishes of the material kind. The goal is to raise the spiritual values of society.” – Albert Einstein 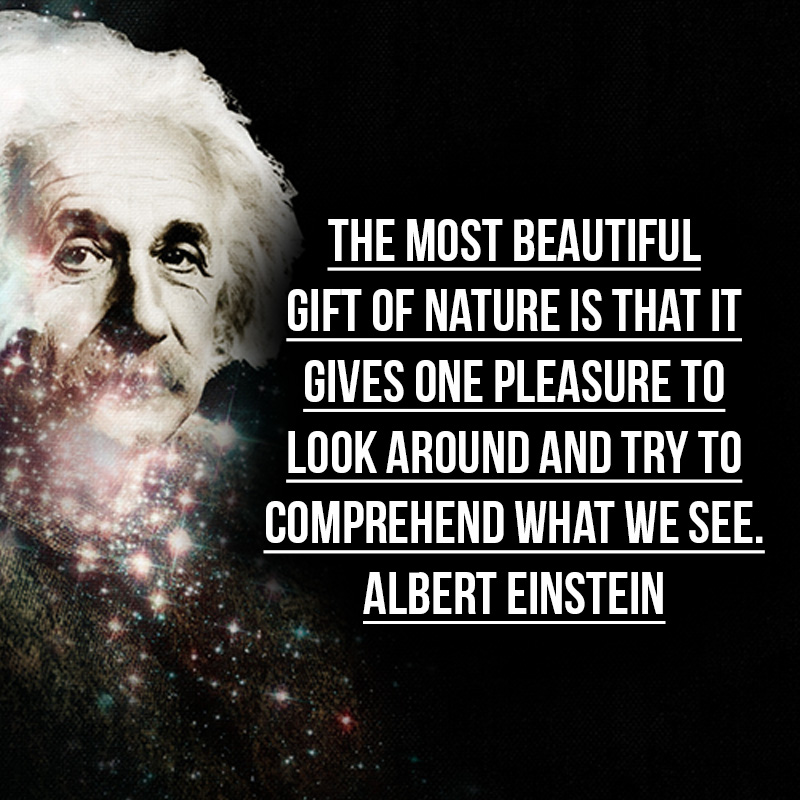 “The most beautiful gift of nature is that it gives one pleasure to look around and try to comprehend what we see.” – Albert Einstein

“The search for truth and knowledge is one of the finest attributes of man—though often it is most loudly voiced by those who strive for it the least.” – Albert Einstein

“I am absolutely convinced that no amount of wealth can help humanity forward, even in the hands of the most dedicated worker in this cause. The example of great and pure personalities can lead us to noble deeds and views. Money only appeals to selfishness, and, without fail, it tempts its owner to abuse it. Can anyone imagine Moses, Jesus, or Gandhi with the moneybags of Carnegie?” – Albert Einstein 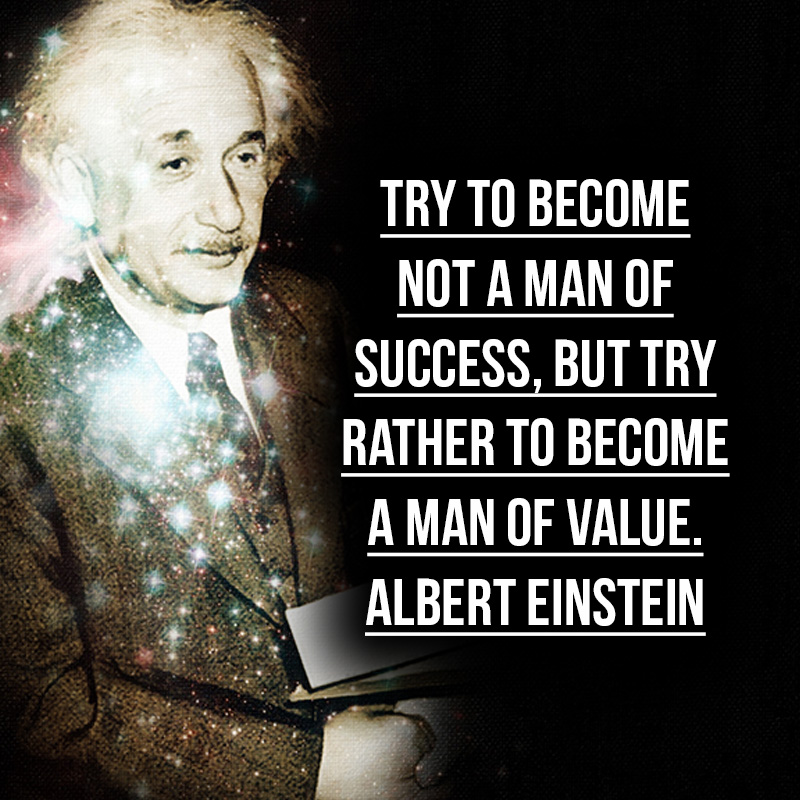 “Try to become not a man of success, but try rather to become a man of value.” – Albert Einstein

“Wisdom is not a product of schooling but of the lifelong attempt to acquire it.” – Albert Einstein

17. ON EDUCATION AND TEACHING

“Never regard your study as a duty, but as the enviable opportunity to learn the liberating beauty of the intellect for your own personal joy and for the profit of the community to which your later work will belong.” – Albert Einstein

“You should try to remember that a dedicated teacher is a valuable messenger from the past, and can be an escort to your future.” – Albert Einstein

18. ON THE MEANING OF NATIONALITY

“Why do people speak of great men in terms of nationality? Great Germans, great Englishmen? Goethe always protested against being called a German poet. Great men are simply men and are not to be considered from the point of view of nationality, nor should the environment in which they were brought up be taken into account.” – Albert Einstein

19. ON PACIFISM AND ATOMIC BOMB

“I believe that the killing of human beings in a war is no better than common murder.” – Albert Einstein

“My participation in the production of the atomic bomb consisted of one single act: I signed a letter to President Roosevelt in which I emphasized the necessity of conducting large-scale experimentation with regard to the feasibility of producing an atom bomb… I felt impelled to take the step because it seemed probable that the Germans might be working on the same problem with every prospect of success. I had no alternative to act as I did, although I have always been a convinced pacifist.” – Albert Einstein

“I admire Gandhi greatly but I believe there are two weaknesses in his program. Nonresistance is the most intelligent way to face difficulty, but it can be practiced only under ideal conditions… It could not be carried out against the Nazi Party today. Then, Gandhi makes a mistake in trying to abolish the machine from modern civilisation. It is here, and it must be dealt with.” – Albert Einstein

“How is it possible that this culture-loving era could be so monstrously amoral? More and more I come to value charity and love of one’s fellow being above everything else.” – Albert Einstein

“The striving for truth and knowledge is one of the highest of man’s qualities – though often the pride is most loudly voiced by those who strive the least.” – Albert Einstein

“Hail to the man who went through life always helping others, knowing no fear, and to whom aggressiveness and resentment are alien. Such is the stuff of which the great moral leaders are made.” – Albert Einstein

“The attempt to combine wisdom and power has only rarely been successful, and then only for a short while.” – Albert Einstein