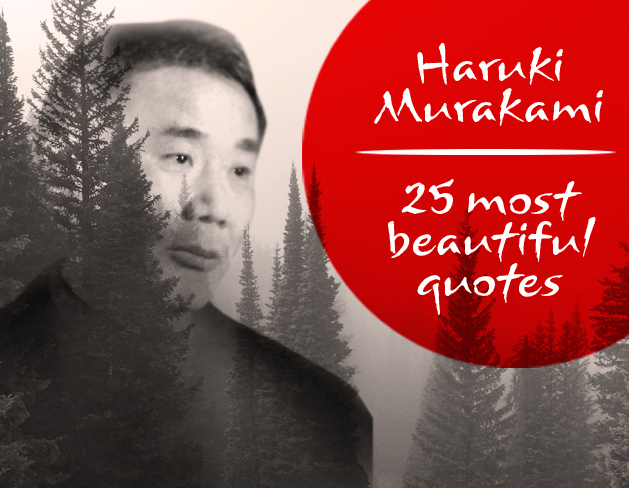 Haruki Murakami, a Japanese literary genius and one of the world’s greatest living novelists, was born in 1949 in Kyoto, Japan’s ancient capital, during the baby boom after World War II.

He probably inherited the passion for books and writing from his parents who were teachers of Japanese literature. However, he didn’t simply follow his parents’ footsteps when it came to the literature of the Land of the Rising Sun. He was never a big fan of the Japanese style of writing. Ever since childhood, he was infatuated with Western culture, books, and music, and that influence can be seen trough his writings, as well as in Haruki Murakami’s best quotes that we are here mentioning.

He didn’t always know that he wanted to be a writer. After graduating from college, he and his wife opened a jazz bar. As they struggled to make ends meet, his career as a professional writer was nowhere in sight. Then, when he was 29, he went to see a baseball game. Watching the players toss the ball, he suddenly had a notion of writing a novel. Later that night, he started working on his first novel. Ten months later the book was finished, he sent it to a literary contest and won the first prize. The publication of his first novel made it possible for him to pay his way by writing. So he sold his jazz bar and became a full-time writer.

With each book that followed, his popularity grew. Japanese readers liked his novels because he, among other things, wrote about topics that were in Japan considered taboo – sexuality, alienation, growing up. His books were also full of unusual symbolism, mysterious events, women, and cats… Japanese readers liked that. But it was the publication of his first realistic novel Norwegian Wood that established him as a literary celebrity, first in Japan and then in the rest of the world.

Haruki Murakami is also known as a long-distance runner. He described his experience as a marathon runner and a triathlete in a book called What I Talk About When I Talk About Running. As with writing, he came to running later in his life, at the age of 33, but with the same dedication, commitment, and effort that he invested in his books.

His wife Yoko is an actress, and they have been married since 1971. She is the first reader of all of his books. Murakami’s quotes and words of wisdom are widely read and loved by millions of fans across the globe.

Here you will find a collection of Haruki Murakami’s quotes that will inspire you and make you look at the world with different eyes.

ON DREAMS AND DREAMING 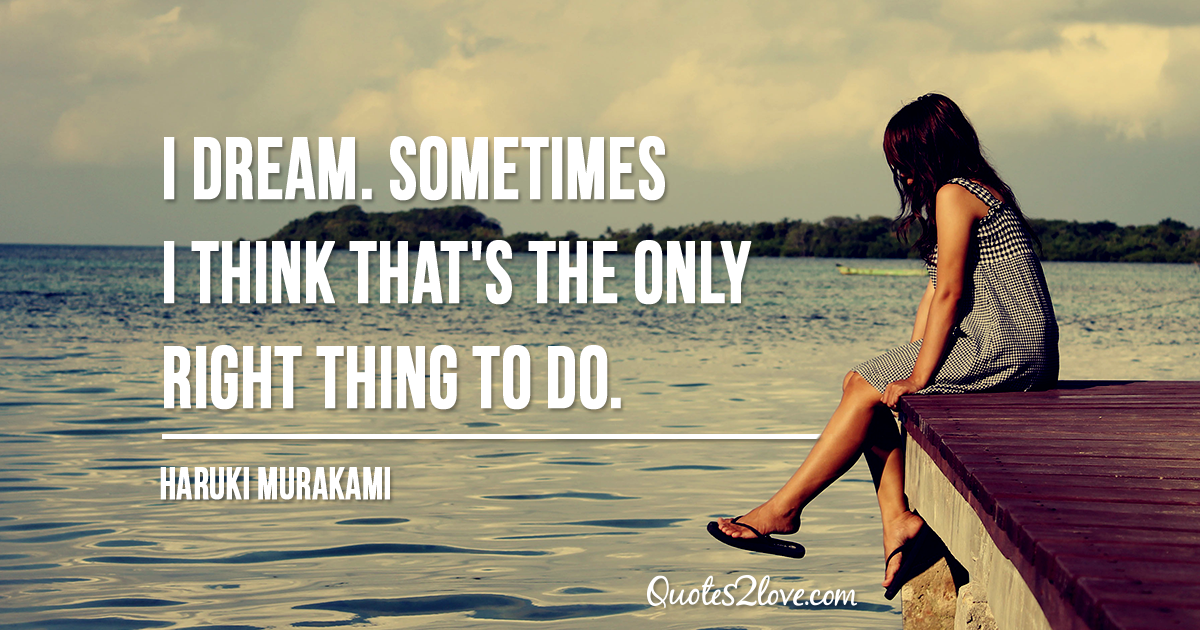 I dream. Sometimes I think that’s the only right thing to do. – Haruki Murakami 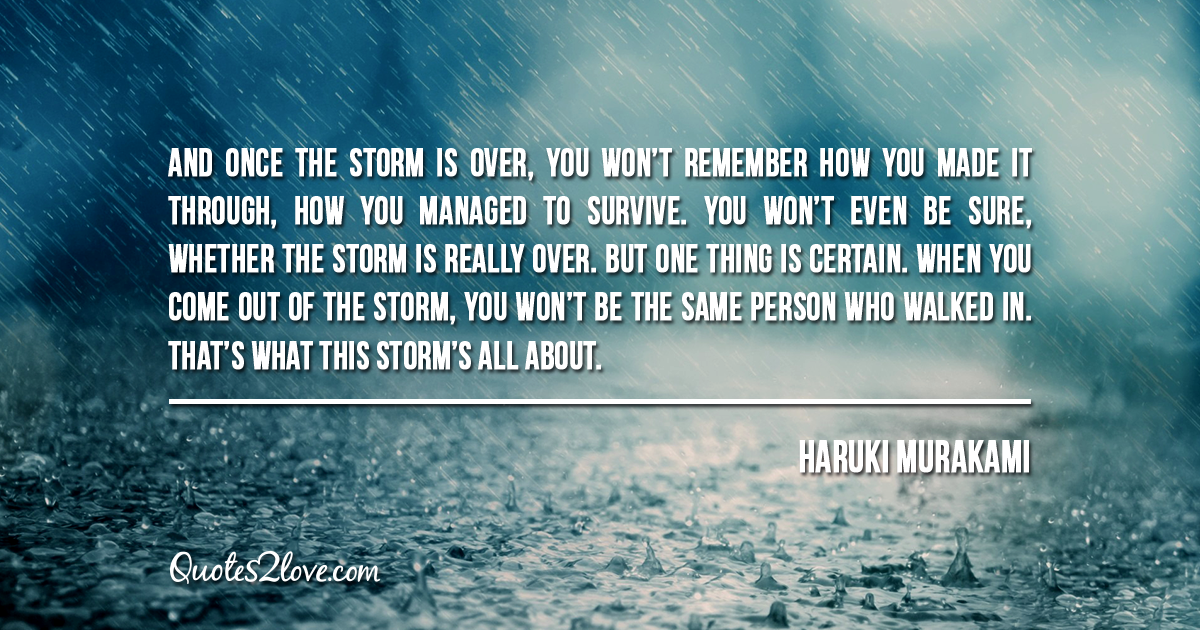 And once the storm is over, you won’t remember how you made it through, how you managed to survive. You won’t even be sure, whether the storm is really over. But one thing is certain. When you come out of the storm, you won’t be the same person who walked in. That’s what this storm’s all about. – Haruki Murakami 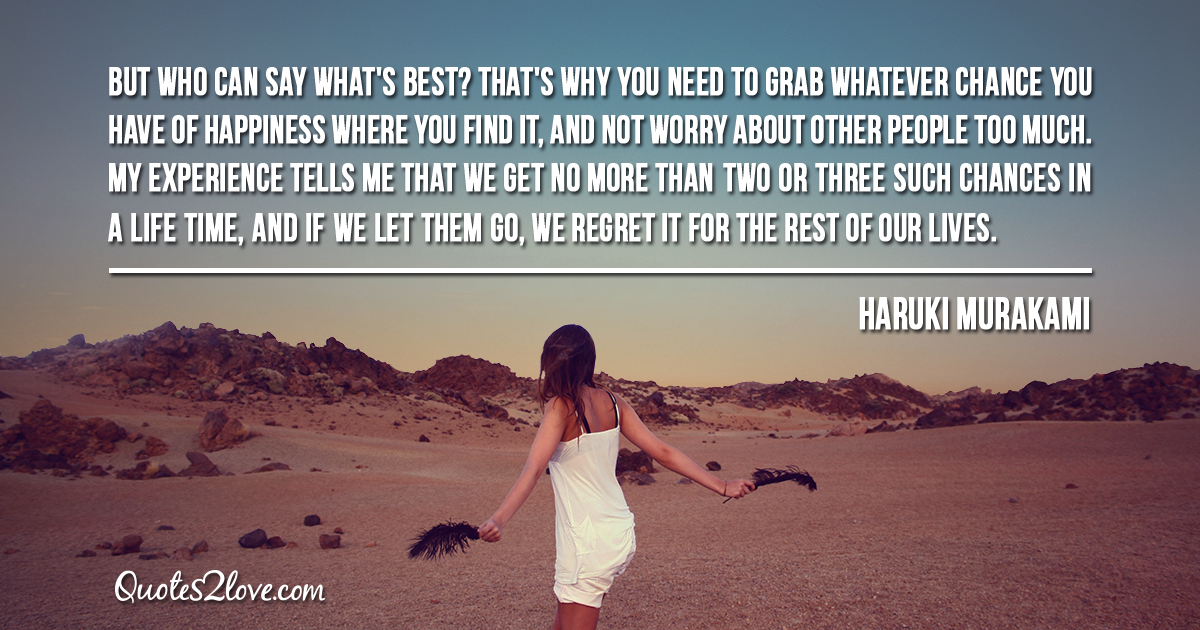 But who can say what’s best? That’s why you need to grab whatever chance you have of happiness where you find it, and not worry about other people too much. My experience tells me that we get no more than two or three such chances in a life time, and if we let them go, we regret it for the rest of our lives. – Haruki Murakami 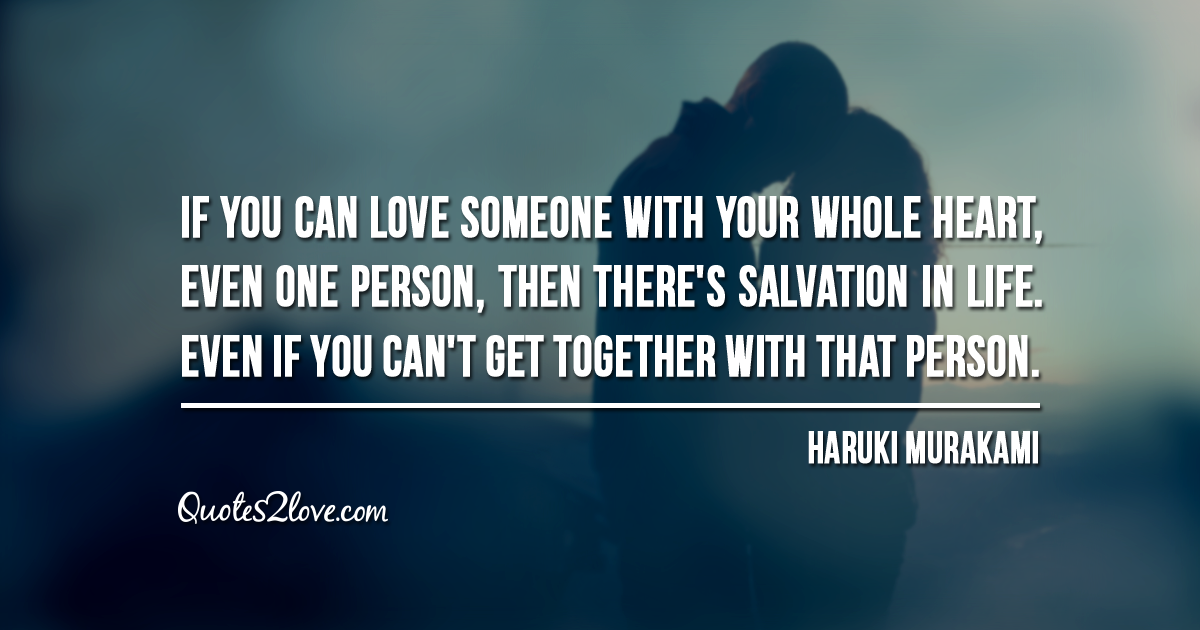 If you can love someone with your whole heart, even one person, then there’s salvation in life. Even if you can’t get together with that person. – Haruki Murakami

ON BOOKS AND READING 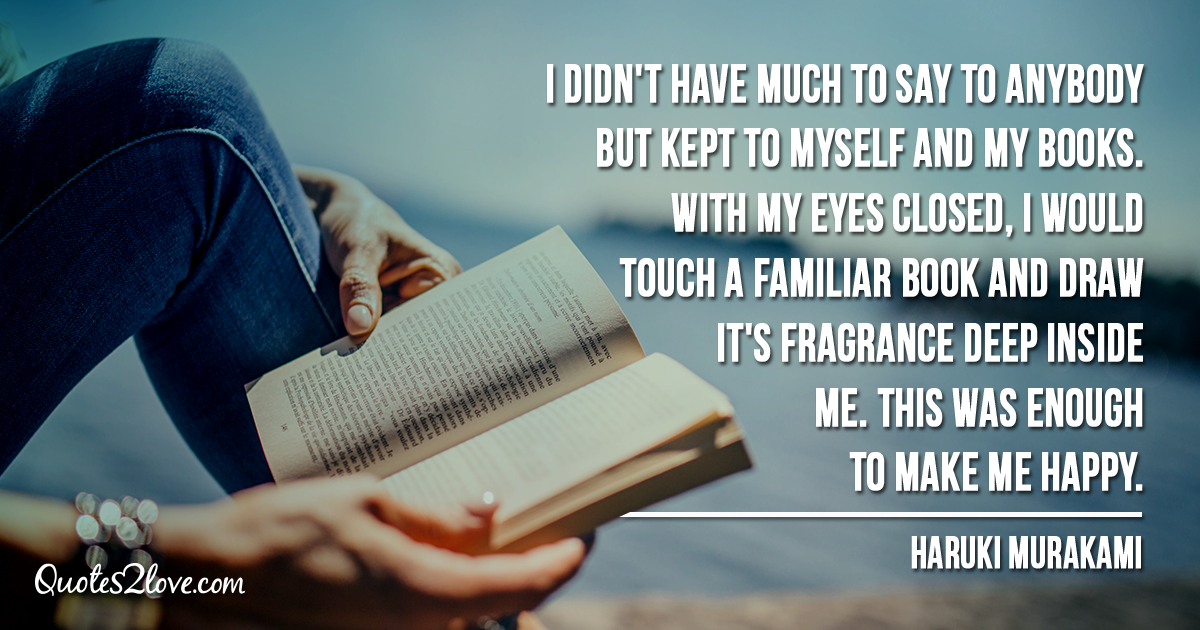 I didn’t have much to say to anybody but kept to myself and my books. With my eyes closed, I would touch a familiar book and draw it’s fragrance deep inside me. This was enough to make me happy. – Haruki Murakami 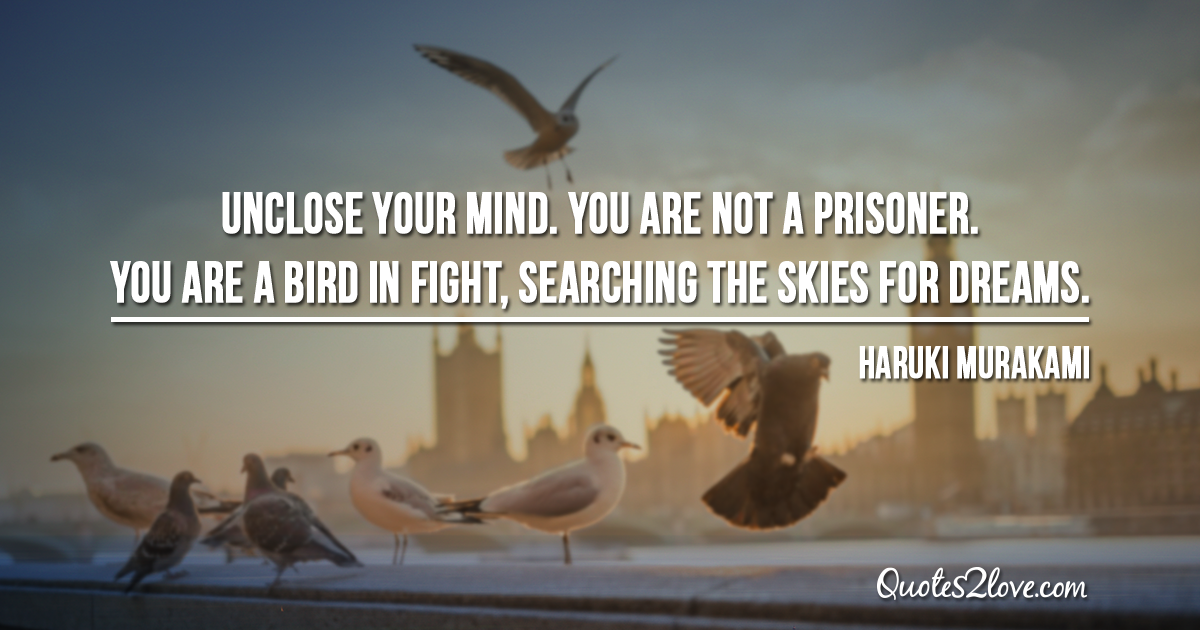 Unclose your mind. You are not a prisoner. You are a bird in fight, searching the skies for dreams. – Haruki Murakami

So the fact that I’m me and no one else is one of my greatest assets. Emotional hurt is the price a person has to pay in order to be independent. – Haruki Murakami 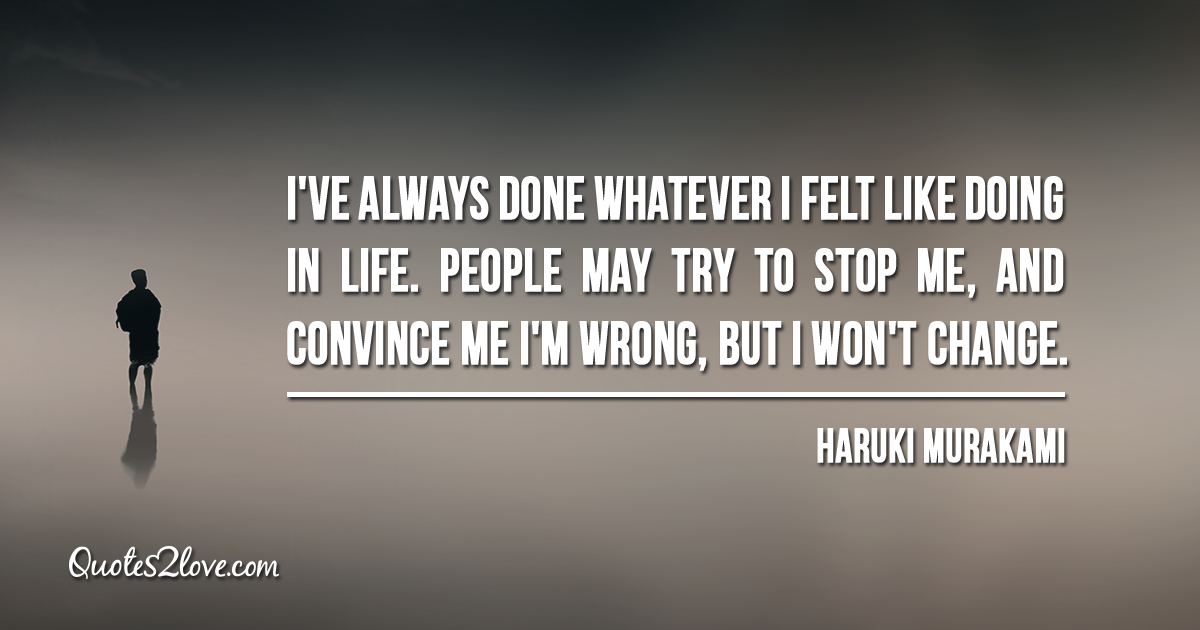 I’ve always done whatever I felt like doing in life. People may try to stop me, and convince me I’m wrong, but I won’t change. – Haruki Murakami

ON SPENDING TIME AND MONEY 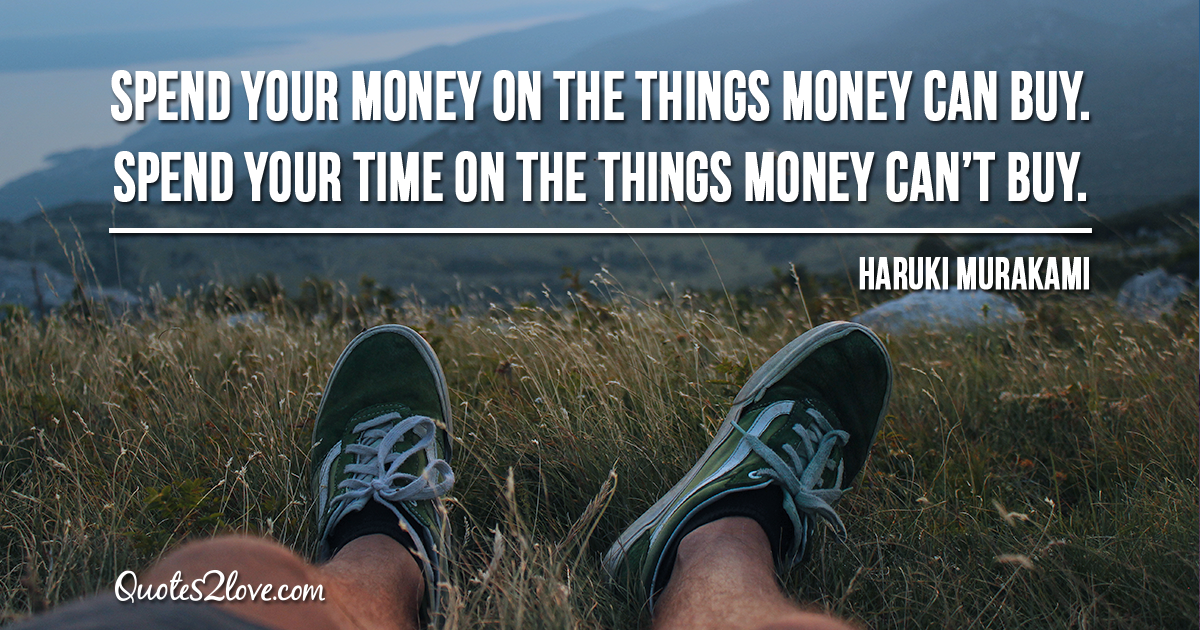 ON LOSING THINGS IN LIFE 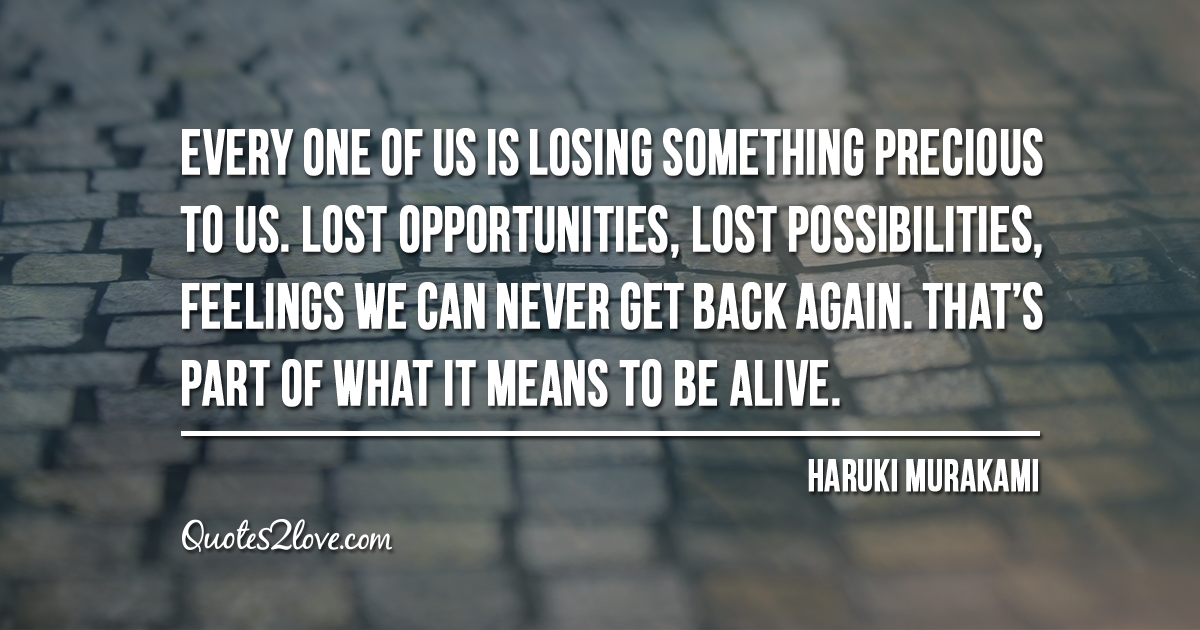 Every one of us is losing something precious to us. Lost opportunities, lost possibilities, feelings we can never get back again. That’s part of what it means to be alive. – Haruki Murakami

ON DEALING WITH REALITY 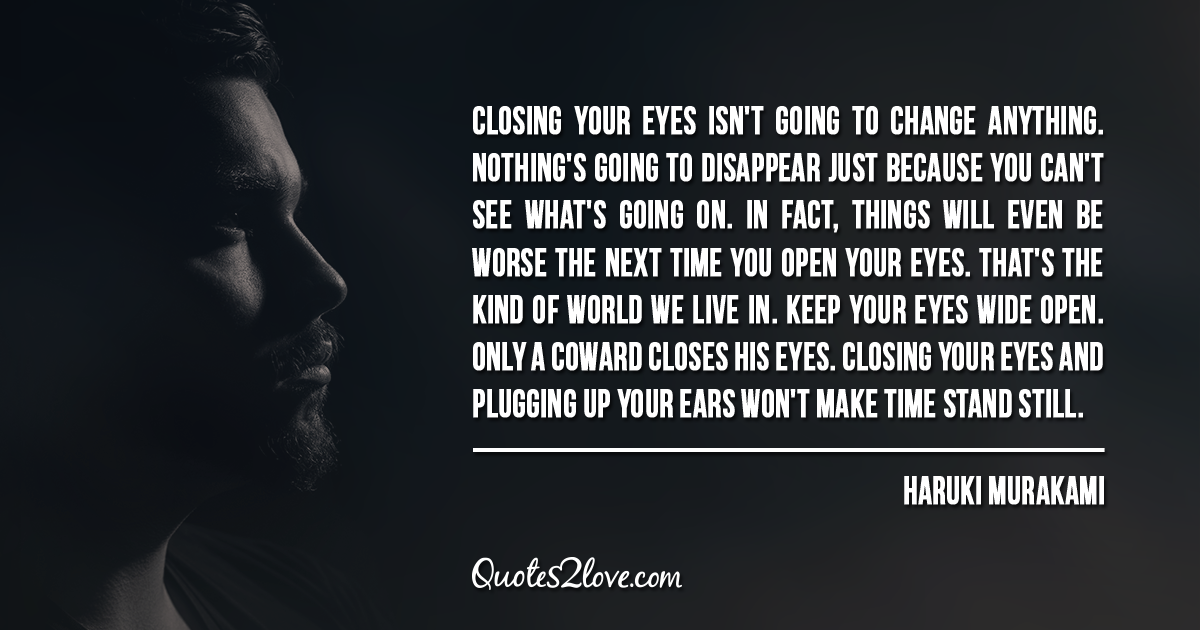 Closing your eyes isn’t going to change anything. Nothing’s going to disappear just because you can’t see what’s going on. In fact, things will even be worse the next time you open your eyes. That’s the kind of world we live in. Keep your eyes wide open. Only a coward closes his eyes. Closing your eyes and plugging up your ears won’t make time stand still. – Haruki Murakami 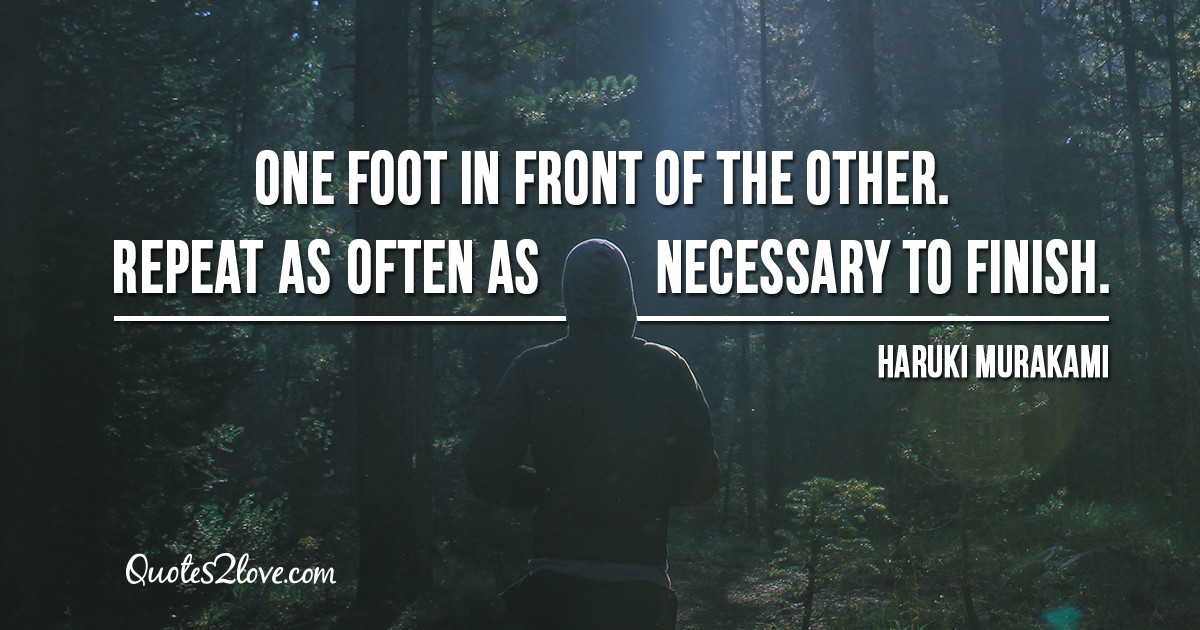 One foot in front of the other. Repeat as often as necessary to finish. – Haruki Murakami

ON PAIN AND SUFFERING 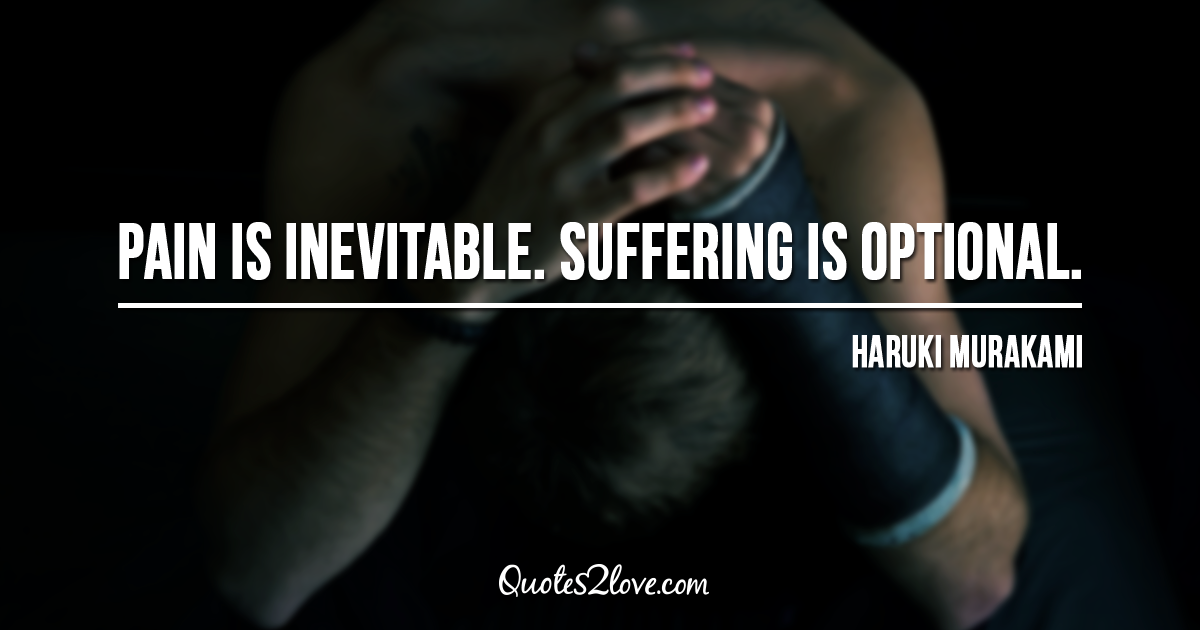 ON FEELING SORRY FOR YOURSELF

Don’t feel sorry for yourself. Only assholes do that. – Haruki Murakami 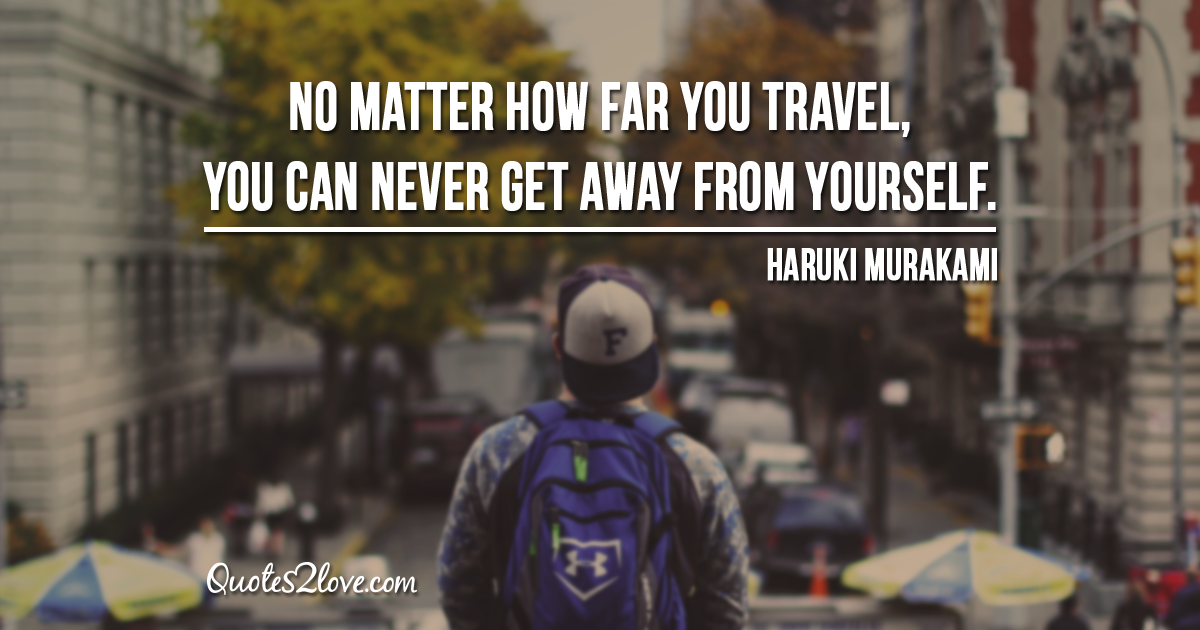 No matter how far you travel, you can never get away from yourself. – Haruki Murakami

ON TAKING LIFE TOO SERIOUSLY 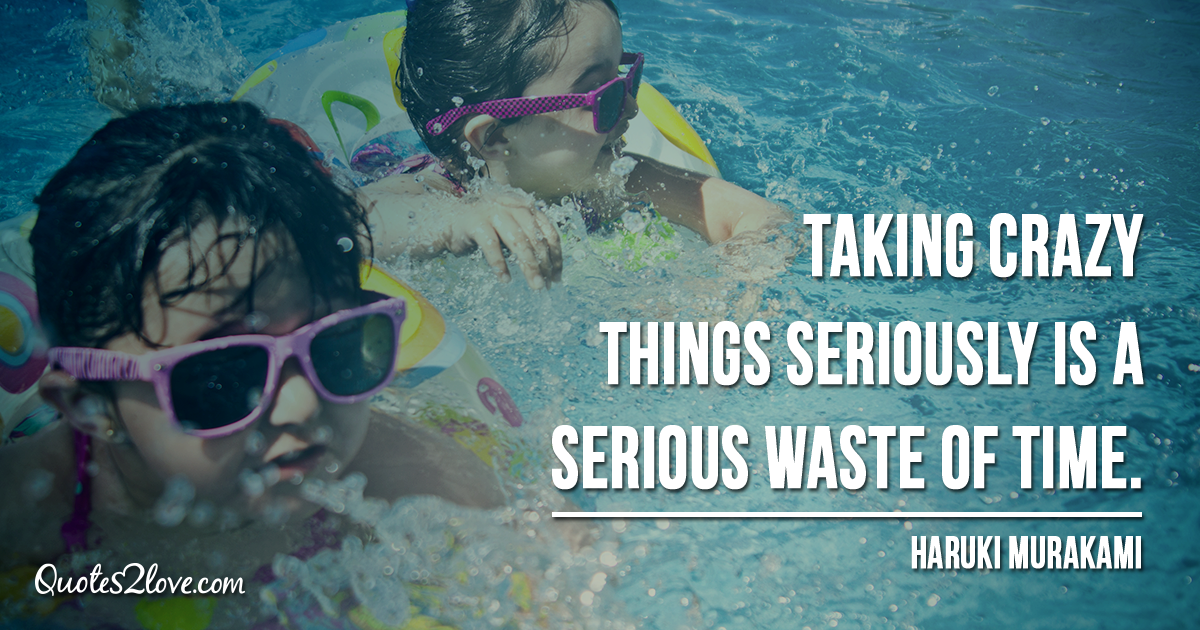 ON LESSONS LEARNED IN SCHOOL 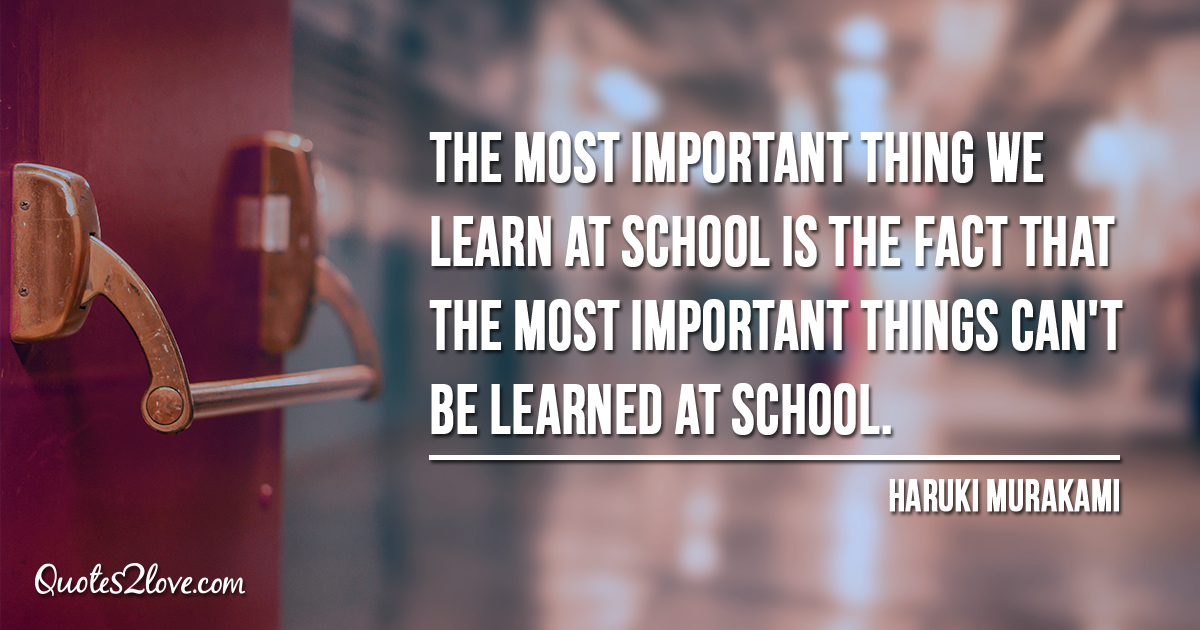 Memories warm you up from the inside. But they also tear you apart. – Haruki Murakami

Body cells replace themselves every month. Even at this very moment. Most everything you think you know about me is nothing more than memories. – Haruki Murakami

Why do people have to be this lonely? What’s the point of it all? Millions of people in this world, all of them yearning, looking to others to satisfy them, yet isolating themselves. Why? Was the earth put here just to nourish human loneliness? – Haruki Murakami

ON WORKINGS OF THE HEART

Your heart is like a great river after a long spell of rain, spilling over its banks. All signposts that once stood on the ground are gone, inundated and carried away by that rush of water. And still the rain beats down on the surface of the river. Every time you see a flood like that on the news you tell yourself: That’s it. That’s my heart. – Haruki Murakami

ON FALLING IN LOVE

People fall in love without reason, without even wanting to. You can’t predict it. That’s love. – Haruki Murakami

Maybe it’s just hiding somewhere. Or gone on a trip to come home. But falling in love is always a pretty crazy thing. It might appear out of the blue and just grab you. Who knows — maybe even tomorrow. – Haruki Murakami

I may be the type who manages to grab all the pointless things in life but lets the really important things slip away. – Haruki Murakami

LEGENDARY ANDY WARHOL QUOTES ON ART, FAME AND LIFEBest Michelangelo's quotes about art and what it means to be a true artist