All our dreams can come true, if we have the courage to pursue them. Walt Disney

True visionary and innovator, creator of the famous cartoon character Mickey Mouse and founder of Disneyland, Walt Disney is one of the most remarkable figures in modern history. He is largely remembered for his role in the field of animation (he won 22 Academy Awards during his lifetime), but is also widely recognized for his truly unique and limitless imagination and creativity. The world wouldn’t be the same without his magical characters that bring joy and happiness to millions across the world.

The following quotes are just a small glimpse into the mind and imagination of this genius and big dreamer called Walt Disney!

All the adversity I’ve had in my life, all my troubles and obstacles, have strengthened me… You may not realize it when it happens, but a kick in the teeth may be the best thing in the world for you.

If you can dream it, you can do it.

When you’re curious, you find lots of interesting things to do.

There is more treasure in books than in all the pirate’s loot on Treasure Island.

We did it Disneyland, in the knowledge that most of the people I talked to thought it would be a financial disaster – closed and forgotten within the first year.

Mickey Mouse popped out of my mind onto a drawing pad 20 years ago on a train ride from Manhattan to Hollywood at a time when business fortunes of my brother Roy and myself were at lowest ebb and disaster seemed right around the corner.

Crowded classrooms and half-day sessions are a tragic waste of our greatest national resource – the minds of our children.

The way to get started is to quit talking and begin doing.

Why worry? If you’ve done the very best you can, worrying won’t make it better.

I have never been interested in personal gain or profit. This business and this studio have been my entire life.

Courage is the main quality of leadership, in my opinion, no matter where it is exercised. Usually it implies some risk — especially in new undertakings. Courage to initiate something and to keep it going, pioneering and adventurous spirit to blaze new ways, often, in our land of opportunity.

Do a good job. You don’t have to worry about the money; it will take care of itself. Just do your best work — then try to trump it.

If you are also a dreamer and want to make your dreams come true, remember the following Walt Disney quote: 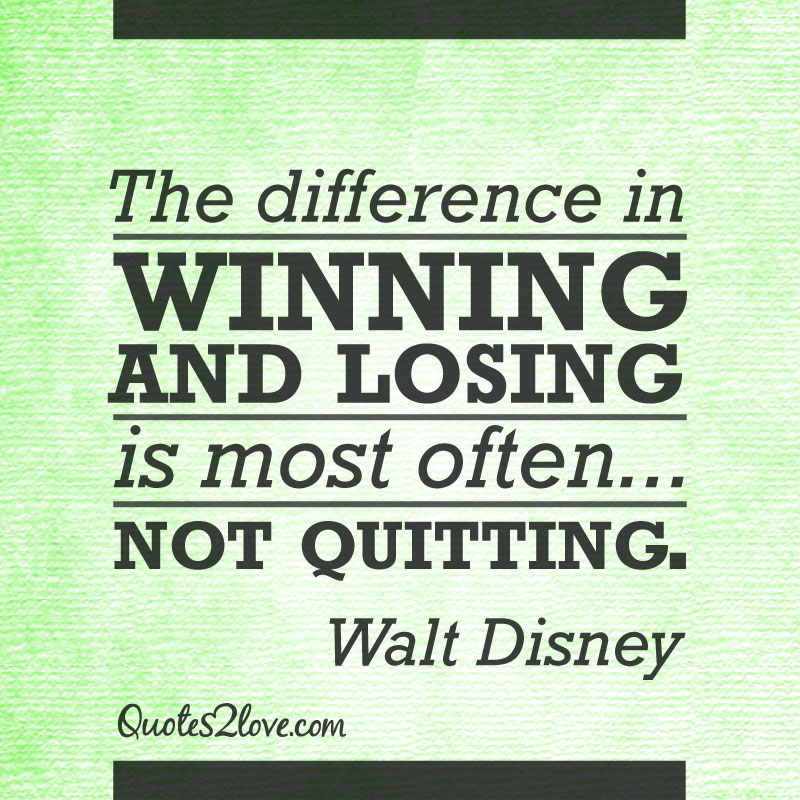 The difference between winning and losing is most often… not quitting. Walt Disney

Love doesn't make the world go around. Love is what makes the ride worthwhile. Franklin P. JonesThe only way to do great work is to love what you do. Steve Jobs