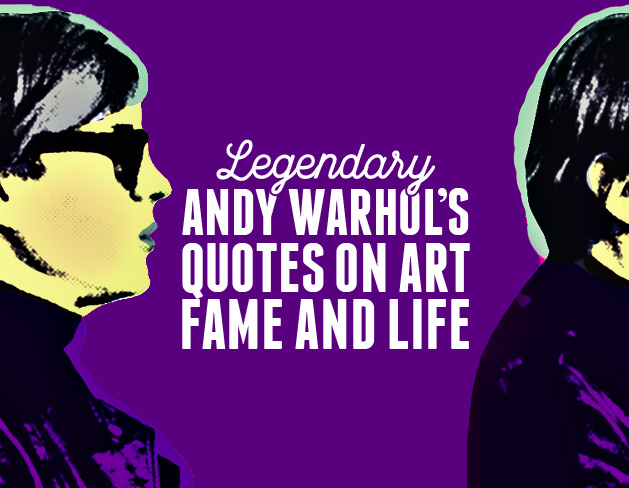 Andy Warhol quotes are a significant source of inspiration and an opportunity to view things from a different perspective. He is not only famous for his art, but also for his sayings. Probably one of the most famous Andy Warhol quotes that everyone knows about is: “In the future, everyone will be world-famous for 15 minutes”.

Andy Warhol was a leading Pop Art figure that managed to be an artist and a celebrity at the same time. His career as an artist began in his mid-thirties, before that he had a very successful career as a commercial illustrator. During this period, he was able to fully understand the appeal and impact that commercial graphics can have on viewers. Andy Warhol’s early work is very decorative and playful contrary to his later silkscreen paintings where he tried to detach himself from his art. When you look at the first exhibition of his Campbell soup cans, you can see that Warhol was still doing everything manually. You can notice brush strokes that he tried to make as subtle as possible. Shortly afterward he began to use photographs that he transferred on canvas using silkscreen printing technique. He is the first one who used photography in his art and thus helped the photography to be seen as a legitimate art form.

Andy Warhol is best-known for his paintings, but he was equally creative and highly productive when it came to other media. He created a novel without writing a word simply by audio recording it; he made an eight-hour film of a man sleeping and even a short film of himself eating a hamburger. Andy was a producer of a famous band Velvet Underground and had plans to start his talk show. He even used a Super Mario game and removed everything from it except the clouds.

Considering that he often lied to his interviewers, we can also see Andy Warhol’s quotes as just another way to express his art. Andy had an obsession with fame and glamor, but in a way that is not so visible at first glance. That is the main idea behind his work. Art is in the ordinary; it is not detached from people, hard to understand or reserved only for a chosen few. Fame and glamor are also intended for everybody, everyone can be famous, that is why he called his companions at The Factory his Superstars and that is why a lot of Andy Warhol quotes are about fame and being famous.

Andy was born in Pittsburgh to Czechoslovakian immigrant parents in a working class neighborhood but spent most of his life in New York. He achieved celebrity status during his lifetime, and today we consider him as one of the most commercially successful artists. Andy saw the beauty in the ordinary, everyday life and routine.

One of the big ideas behind his work is repetition, the repetition of everyday objects like Campbell soup. He ate a different Campbell soup every morning all his life. He was taking motives for his paintings of everything that constitutes modern life and pop culture: – newspapers (disaster series), products (Brillo boxes), nature (flowers), celebrities (Marilyn Monroe, Liz Taylor, Elvis etc.). For example, he painted Coke because as he said: “What’s great about this country is that America started the tradition where the richest consumers buy essentially the same things as the poorest. You can be watching TV and see Coca-Cola, and you can know that the President drinks Coke. Liz Taylor drinks Coke, and just think, you can drink Coke, too.” Through the idea of repetition Warhol also tried to show the mass-production and the unification of all kinds of household products, news and events, so art should also be mass-produced. Therefore, he called his studio The Factory and tried to make his art superficial, ordinary and empty of meaning. As you will see later, a lot of Andy Warhol quotes are about that.

The turning point in his life and career was when acquaintance Valerie Solanas tried to murder him and shot him in 1968. This had an enormous impact on Warhol and he decided to close down The Factory. He also bought the original human skull to remind him of the transience of life. In the 70s Warhol was a part of the high society and worked mostly on commissioned portraits as he considered that good business is the best form of art. “Being good in business is the most fascinating kind of art. Making money is art and working is art and good business is the best art.” – Andy Warhol. He died in 1987 during routine operation. He was only 58.

Warhol was a person who in a few words said a lot. That’s why Andy Warhol quotes are so inspiring. Here are Andy Warhol quotes and thoughts that are carefully selected and handpicked from books about his work and life. He was one of the most influential artists of the second half of the 20th century, as well as celebrity superstar who shaped modern life and pop culture for almost 30 years.

My prediction from the sixties finally came true: ‘In the future everyone will be famous for fifteen minutes.’ I’m bored with that line. I never use it anymore. My new line is in 15 minutes everybody will be famous. – Andy Warhol

To be a successful artist, you have to have your work shown in a good gallery for the same reason that, say, Dior never sold his originals from a counter at Woolworths. – Andy Warhol 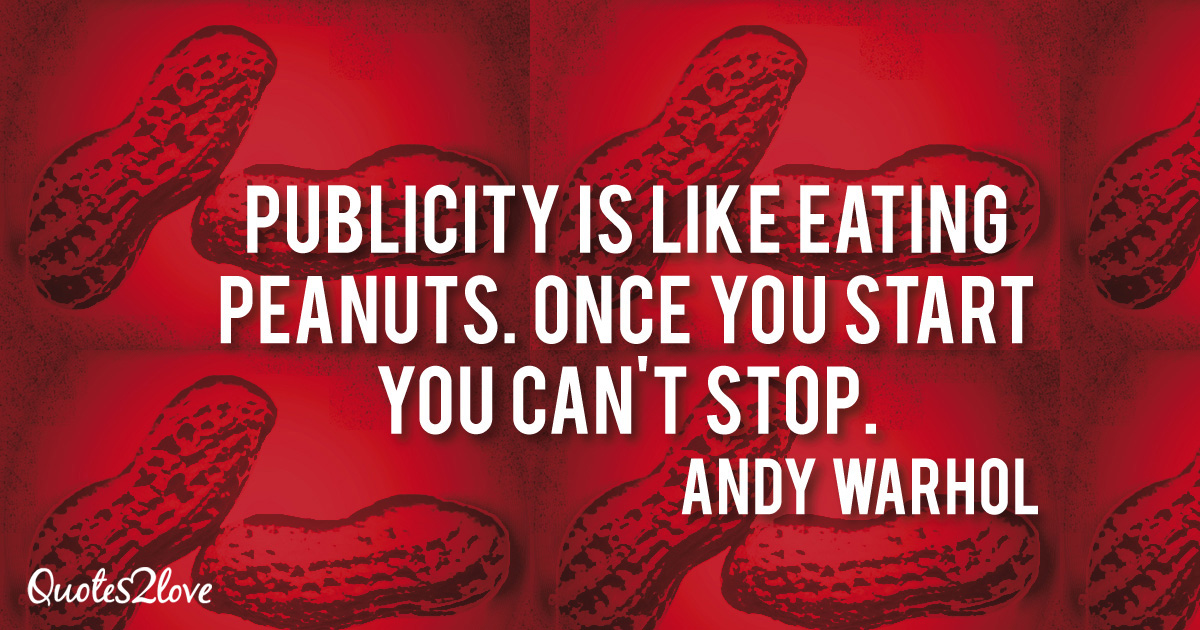 Publicity is like eating peanuts. Once you start you can’t stop. – Andy Warhol 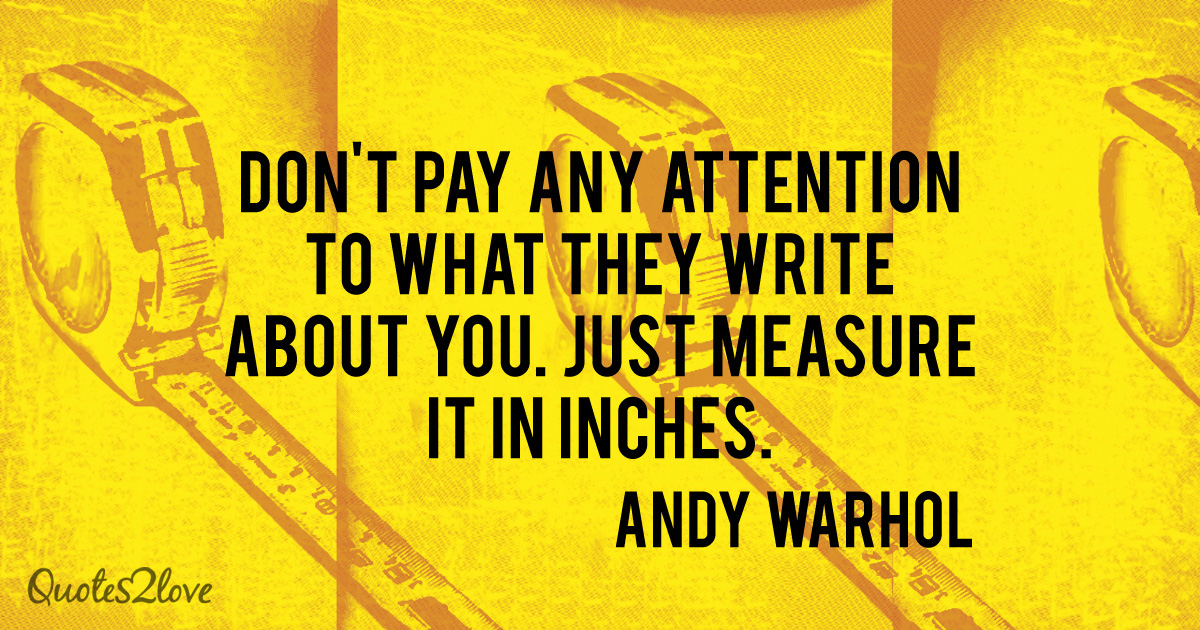 Don’t pay any attention to what they write about you. Just measure it in inches. – Andy Warhol

I wanted to do a ‘bad book’ the way I’d some ‘bad movies’ and ‘bad art’ because when you do something exactly wrong, you always end up with something right. – Andy Warhol

I just happen to like ordinary things. When I paint them, I don’t try to make them extraordinary. I just tried to bring them ordinary-ordinary. – Andy Warhol

I started repeating the same image because I like the way the repetition change same image. Also, I felt at the time, as I do now, that people can look at and absorb more than one image at a time. – Andy Warhol

I think we’re a vacuum here at the Factory, it’s great. I like being a vacuum, it leaves me alone to do the work. We are bothered though; we have cops coming up here all the time. They think they’re doing awful things but we aren’t. – Andy Warhol

A lot of people thought it was me everyone at the Factory was hanging around, that I was some kind of big attraction that everyone came to see, but that’s absolutely backward; it was me who was the who was hanging around everyone else. I just paid the rent, and the crowds came simply because the door was open. People weren’t particularly interested in seeing me, they were interested in seeing each other. They came to see who came. – Andy Warhol

It’s the movies that have really been running things in America ever since they were invented. They show you what to do, how to do it, when to do it, how to feel about it, and how to look how you feel about it. – Andy Warhol

Seeing everybody up all the time made me think that sleep was becoming pretty obsolete, so I decided I’d better quickly do a movie of a person sleeping. – Andy Warhol 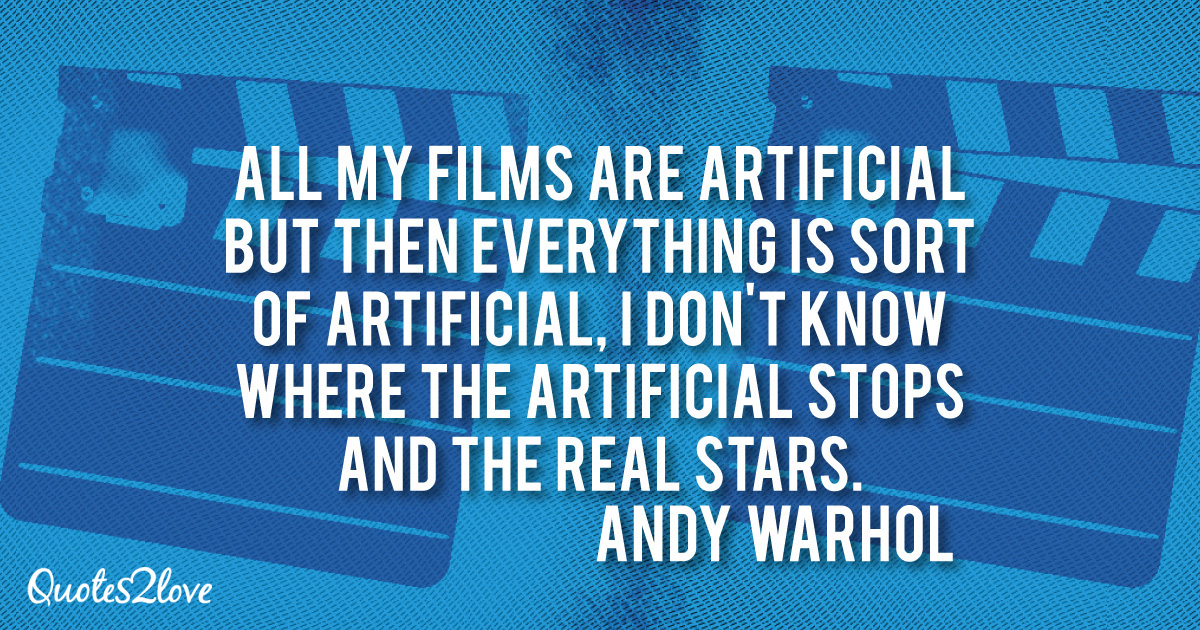 All my films are artificial but then everything is sort of artificial, I don’t know where the artificial stops and the real stars. – Andy Warhol 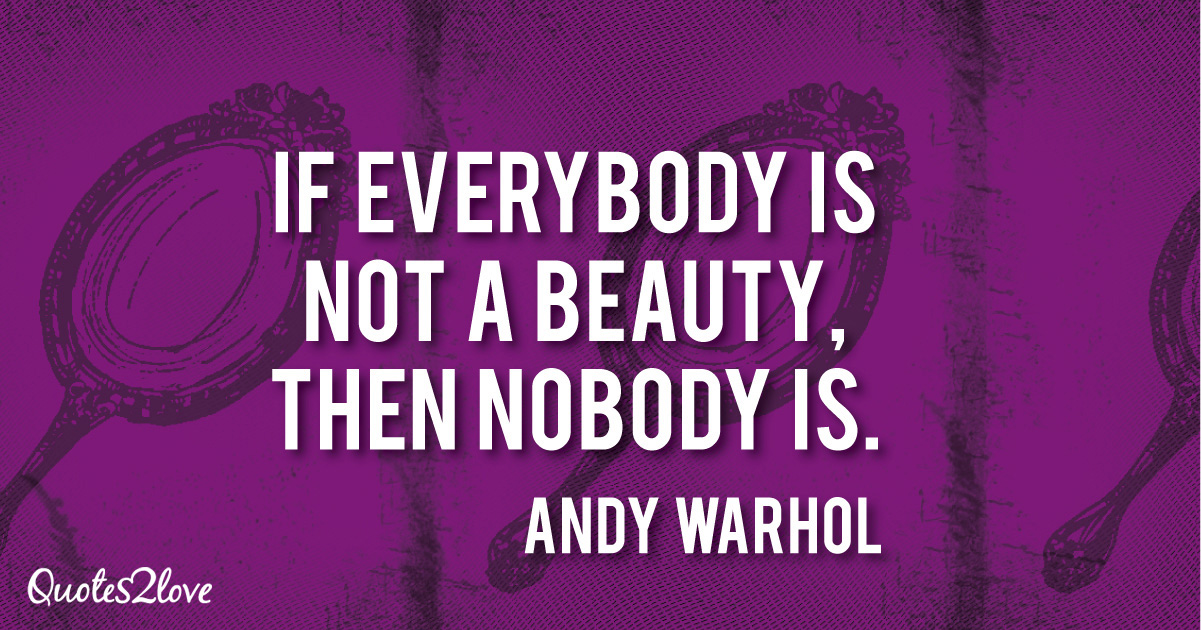 If everybody is not a beauty, then nobody is. – Andy Warhol

Well, what do you like most? That’s how it started printing money. – Andy Warhol 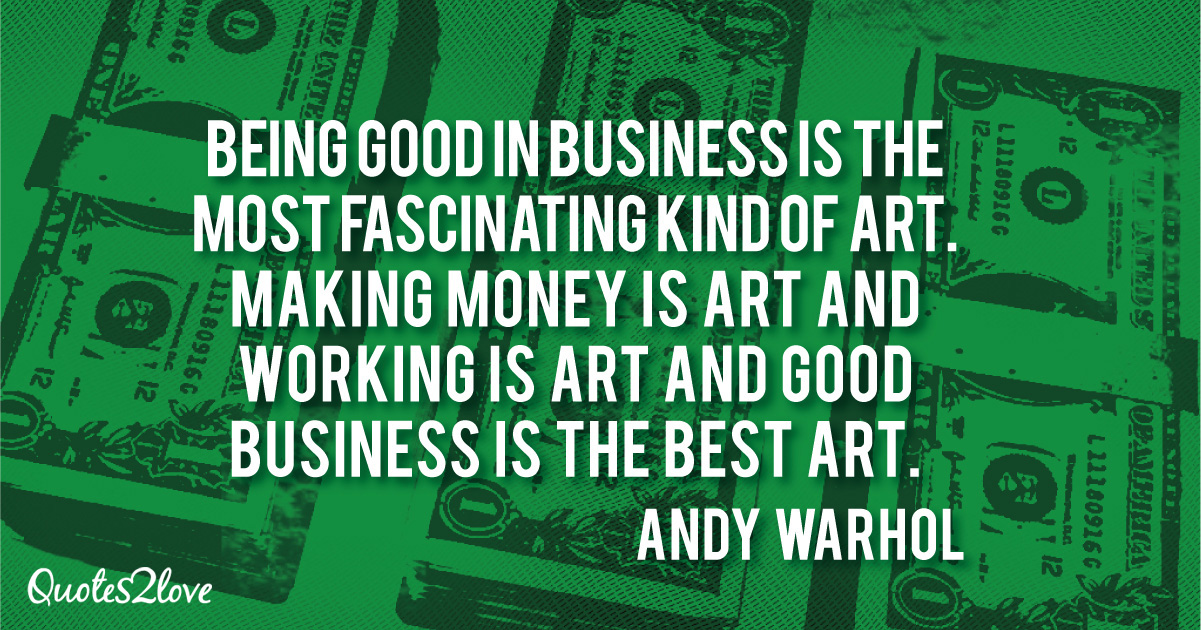 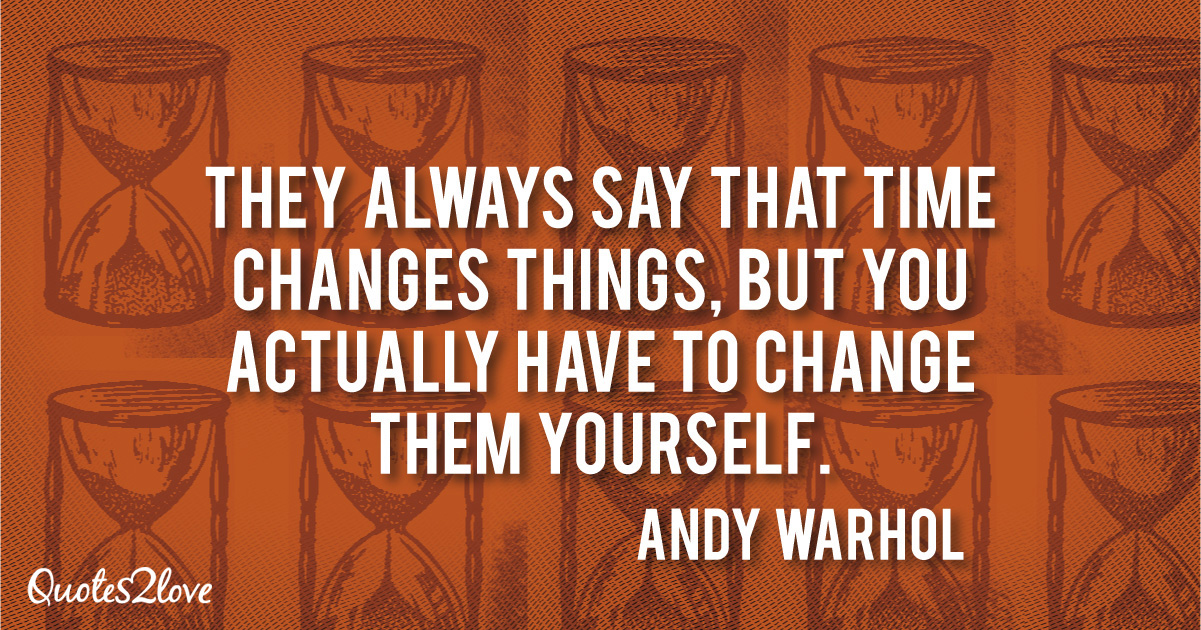 They always say that time changes things, but you actually have to change them yourself. – Andy Warhol

12. unforgettable ANDY WARHOL QUOTES On himself

I like boring things. I like things to be exactly the same over and over again. – Andy Warhol

If you want to know all about Andy Warhol, just look at the surface: of my paintings and films and me, and then I am. There’s nothing behind it. – Andy Warhol

Ever since I was a kid I wanted to live as fast as I could, so I always try to find ways to do things faster. – Andy Warhol

Since people are going to be living longer and getting older, they’ll just have to learn how to be babies longer. – Andy Warhol