Timeless Anaïs Nin’s quotes on love, sensuality and living life to the fullest 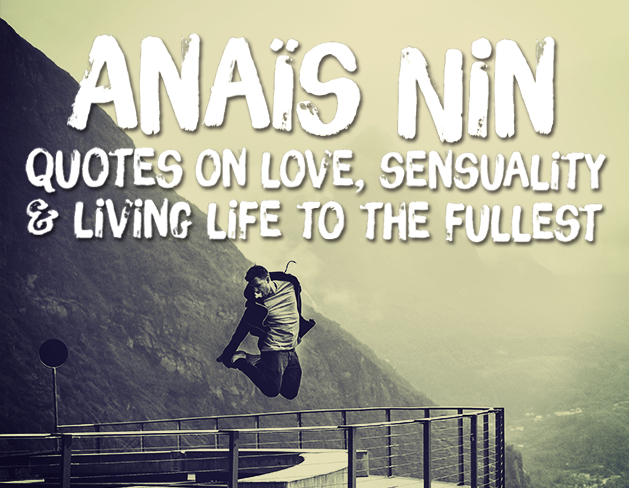 Here is a collection of timeless and unforgettable Anaïs Nin quotes about love, sensuality, yearning, happiness and living life to the fullest. 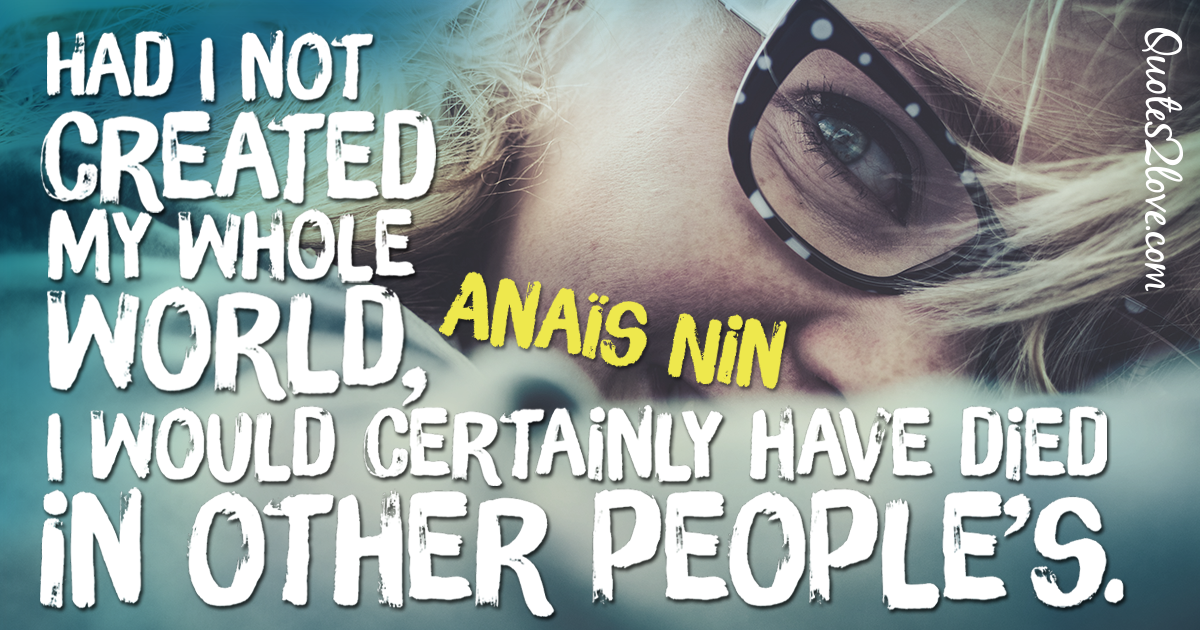 Had I not created my whole world, I would certainly have died in other people’s. – Anaïs Nin

The possession of knowledge does not kill the sense of wonder and mystery. There is always more mystery. – Anaïs Nin

Luxury is not a necessity to me, but beautiful and good things are. – Anaïs Nin 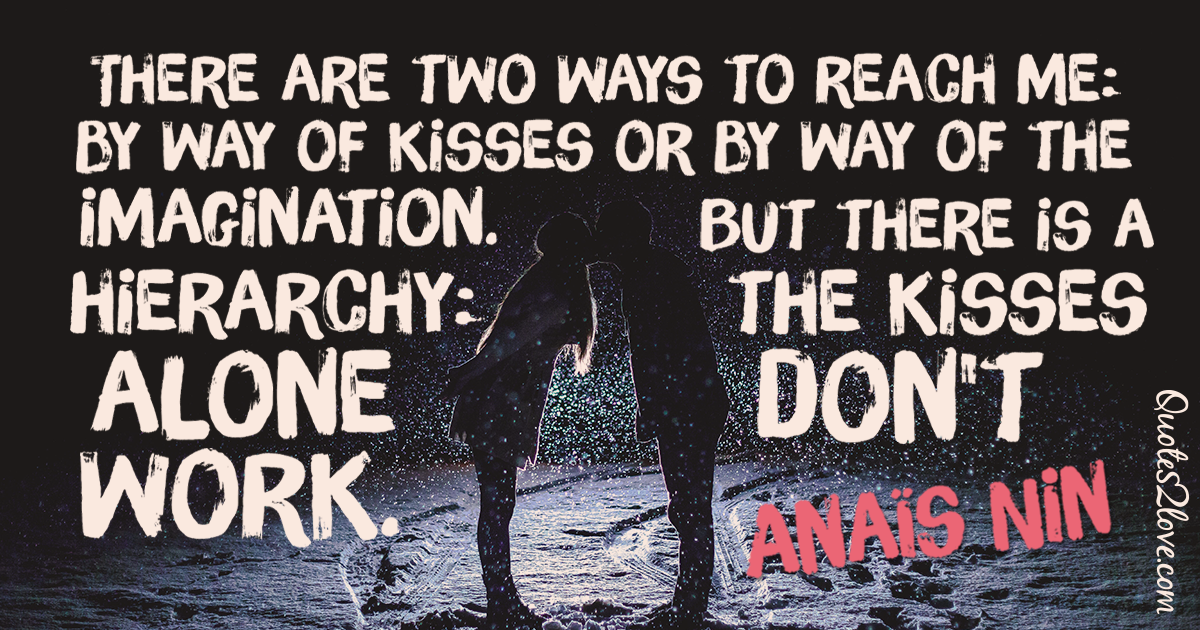 There are two ways to reach me: by way of kisses or by way of the imagination. But there is a hierarchy: the kisses alone don’t work. – Anaïs Nin

Each friend represents a world in us, a world possibly not born until they arrive, and it is only by this meeting that a new world is born. – Anaïs Nin 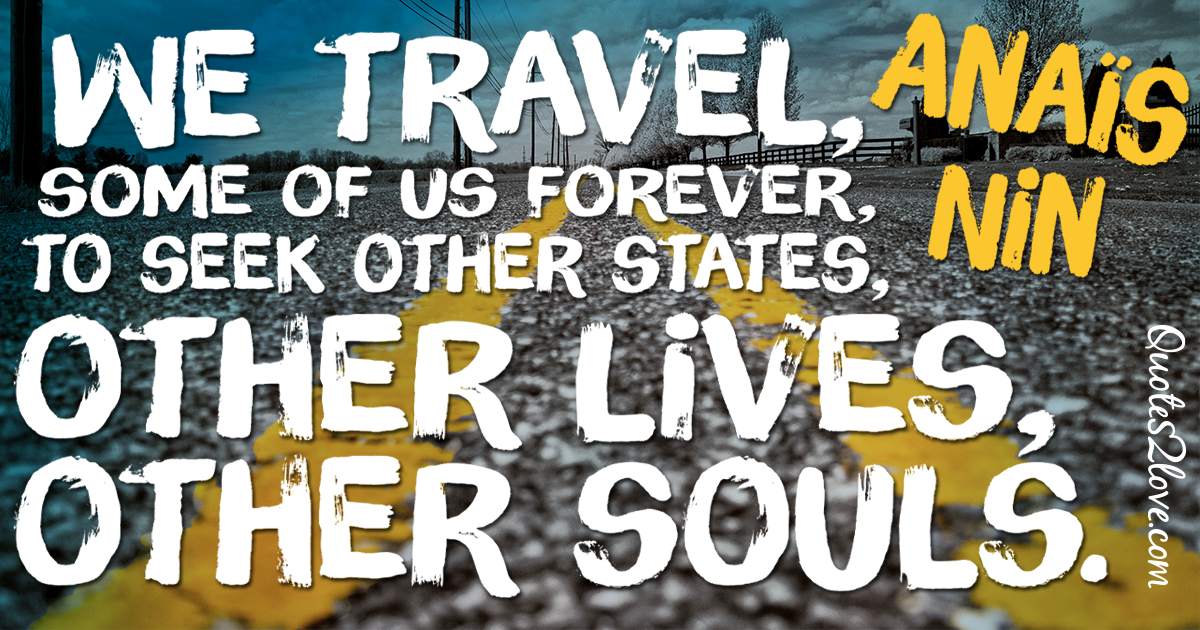 We travel, some of us forever, to seek other states, other lives, other souls. – Anaïs Nin

I disregard the proportions, the measures, the tempo of the ordinary world. I refuse to live in the ordinary world as ordinary women. To enter ordinary relationships. I want ecstasy. I am a neurotic – in the sense that I live in my world. I will not adjust myself to the world. I am adjusted to myself. – Anaïs Nin

I don’t really want to become normal, average, standard. I want merely to gain in strength, in the courage to live out my life more fully, enjoy more, experience more. I want to develop even more original and more unconventional traits. – Anaïs Nin

Do not seek the because – in love there is no because, no reason, no explanation, no solutions. – Anaïs Nin

People living deeply have no fear of death. – Anaïs Nin 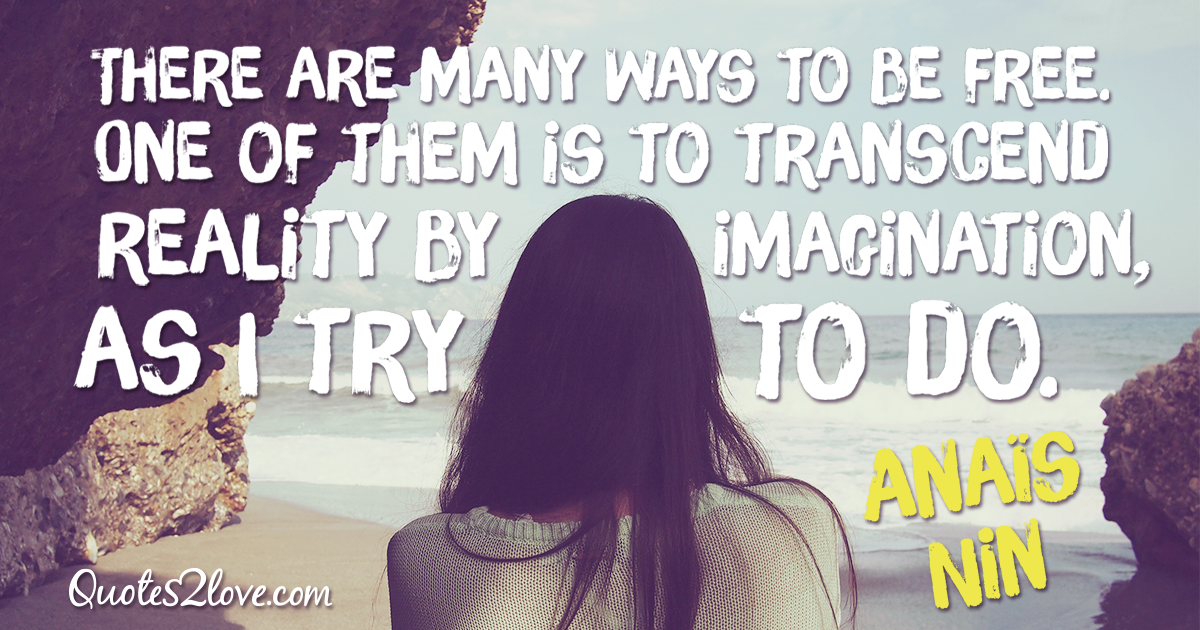 There are many ways to be free. One of them is to transcend reality by imagination, as I try to do.”
– Anaïs Nin

I made no resolutions for the New Year. The habit of making plans, of criticizing, sanctioning and molding my life, is too much of a daily event for me. – Anaïs Nin 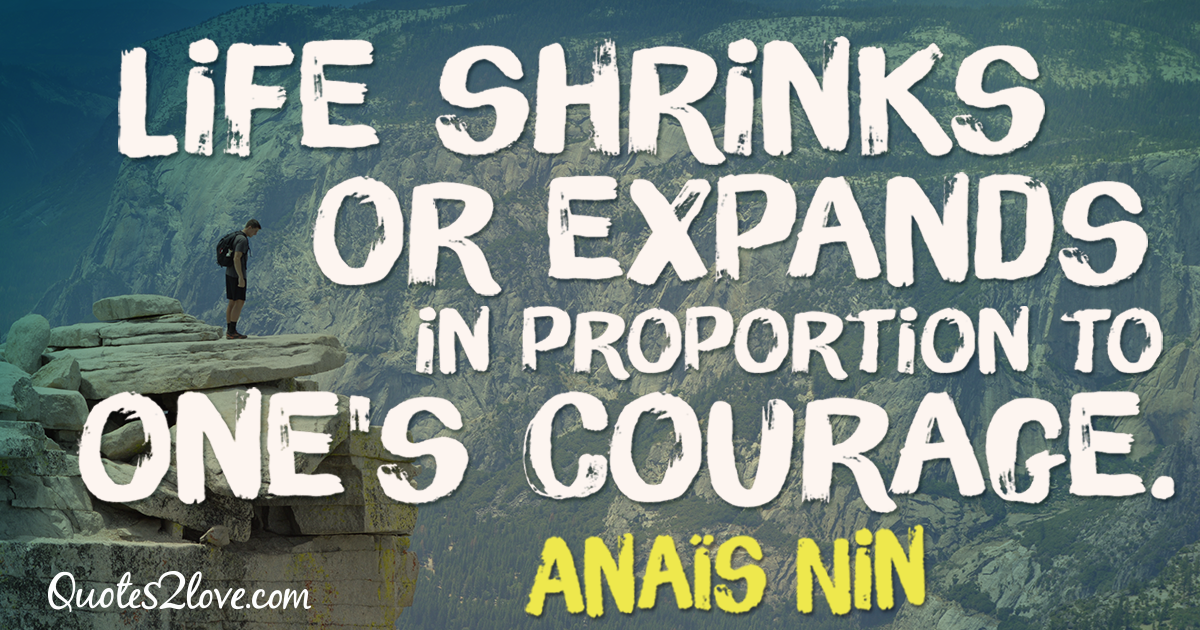 To think of him in the middle of the day lifts me out of ordinary living. – Anaïs Nin

You have a right to experiment with your life. You will make mistakes. And they are right too. No, I think there was too rigid a pattern. You came out of an education and are supposed to know your vocation. Your vocation is fixed, and maybe ten years later you find you are not a teacher anymore or you’re not a painter anymore. It may happen. It has happened. I mean Gauguin decided at a certain point he wasn’t a banker anymore; he was a painter. And so he walked away from banking. I think we have a right to change course. But society is the one that keeps demanding that we fit in and not disturb things. They would like you to fit in right away so that things work now. – Anaïs Nin 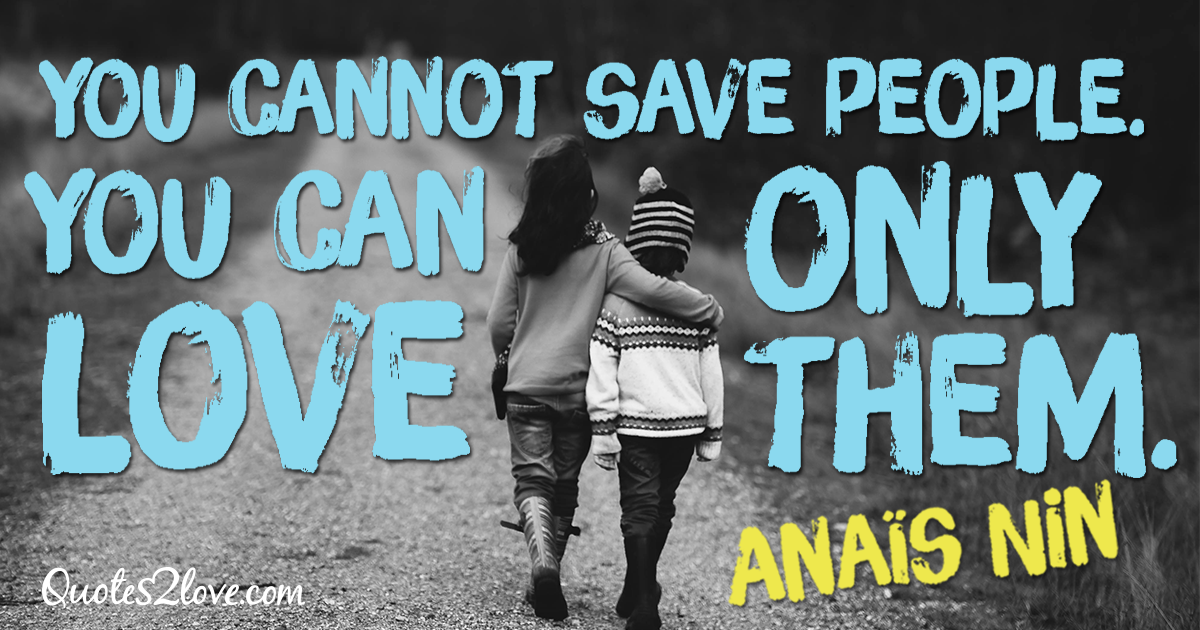 You cannot save people. You can only love them. – Anaïs Nin

You live like this, sheltered, in a delicate world, and you believe you are living. Then you read a book… or you take a trip… and you discover that you are not living, that you are hibernating. The symptoms of hibernating are easily detectable: first, restlessness. The second symptom (when hibernating becomes dangerous and might degenerate into death): absence of pleasure. That is all. It appears like an innocuous illness. Monotony, boredom, death. Millions live like this (or die like this) without knowing it. They work in offices. They drive a car. They picnic with their families. They raise children. And then some shock treatment takes place, a person, a book, a song, and it awakens them and saves them from death. Some never awaken. – Anaïs Nin 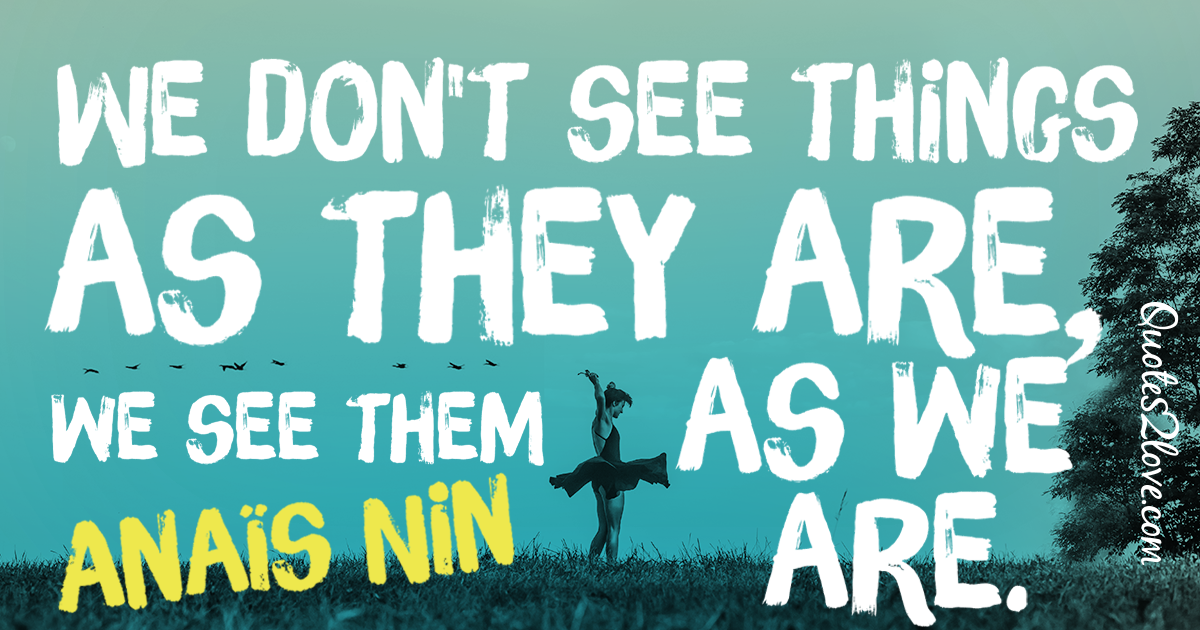 We don’t see things as they are, we see them as we are. – Anaïs Nin

I am lonely, yet not everybody will do. I don’t know why, some people fill the gaps and others emphasize my loneliness. – Anaïs Nin 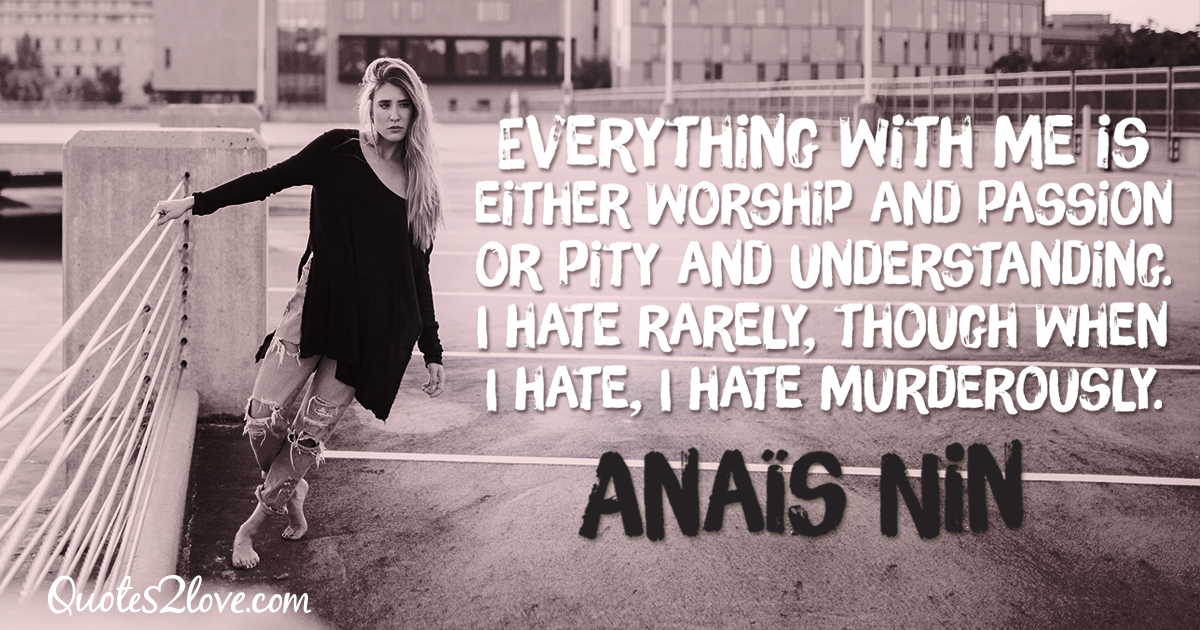 Everything with me is either worship and passion or pity and understanding. I hate rarely, though when I hate, I hate murderously. – Anaïs Nin

We do not grow absolutely, chronologically. We grow sometimes in one dimension, and not in another; unevenly. We grow partially. We are relative. We are mature in one realm, childish in another. The past, present, and future mingle and pull us backward, forward, or fix us in the present. We are made up of layers, cells, constellations. – Anaïs Nin 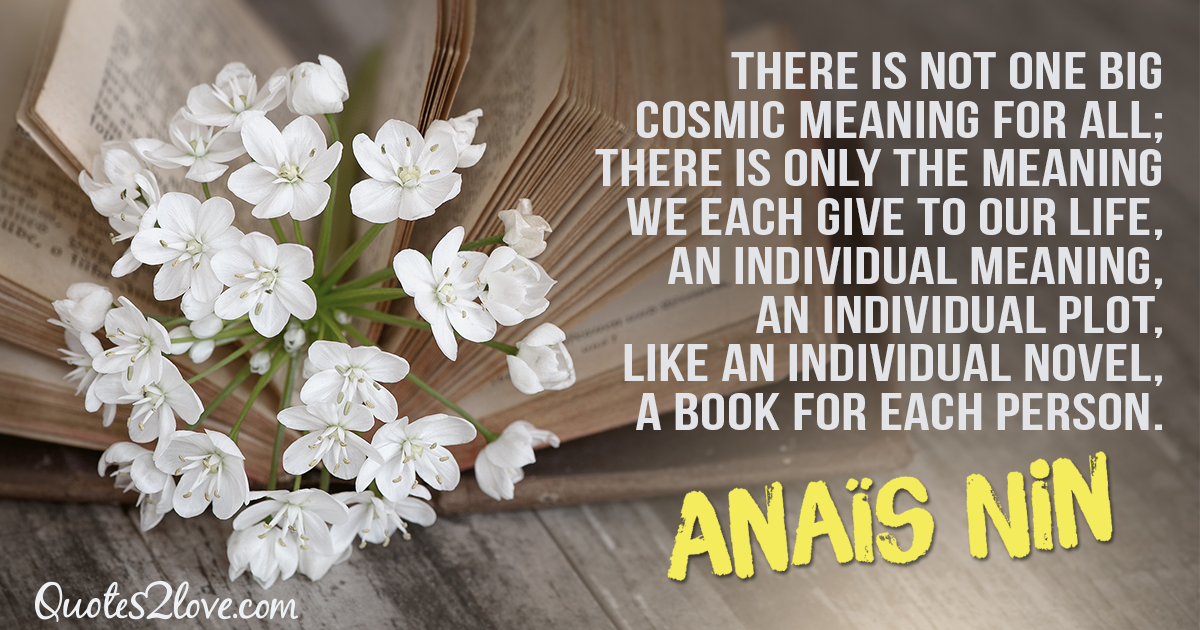 I reserve the right to love many different people at once, and to change my prince often. – Anaïs Nin

There were always in me, two women at least, one woman desperate and bewildered, who felt she was drowning and another who would leap into a scene, as upon a stage, conceal her true emotions because they were weaknesses, helplessness, despair, and present to the world only a smile, an eagerness, curiosity, enthusiasm, interest. – Anaïs Nin 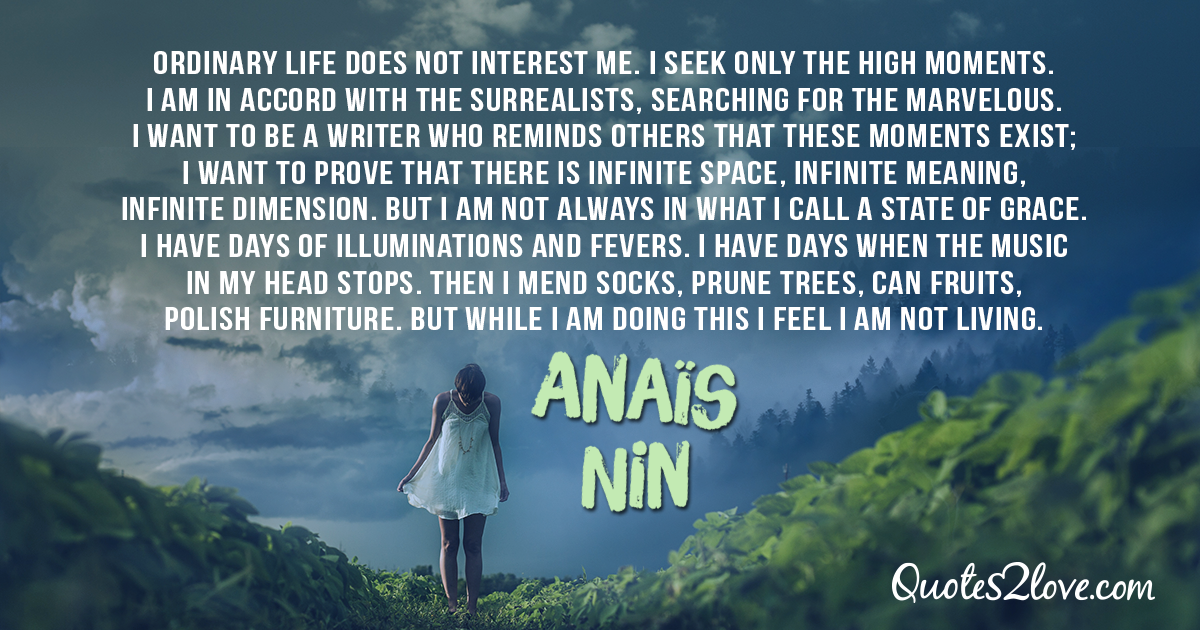 Ordinary life does not interest me. I seek only the high moments. I am in accord with the surrealists, searching for the marvelous. I want to be a writer who reminds others that these moments exist; I want to prove that there is infinite space, infinite meaning, infinite dimension. But I am not always in what I call a state of grace. I have days of illuminations and fevers. I have days when the music in my head stops. Then I mend socks, prune trees, can fruits, polish furniture. But while I am doing this I feel I am not living. – Anaïs Nin

I prefer by far the warmth and softness to mere brilliancy and coldness. Some people remind me of sharp dazzling diamonds. Valuable but lifeless and loveless. Others, of the simplest field flowers, with hearts full of dew and with all the tints of celestial beauty reflected in their modest petals. – Anaïs Nin 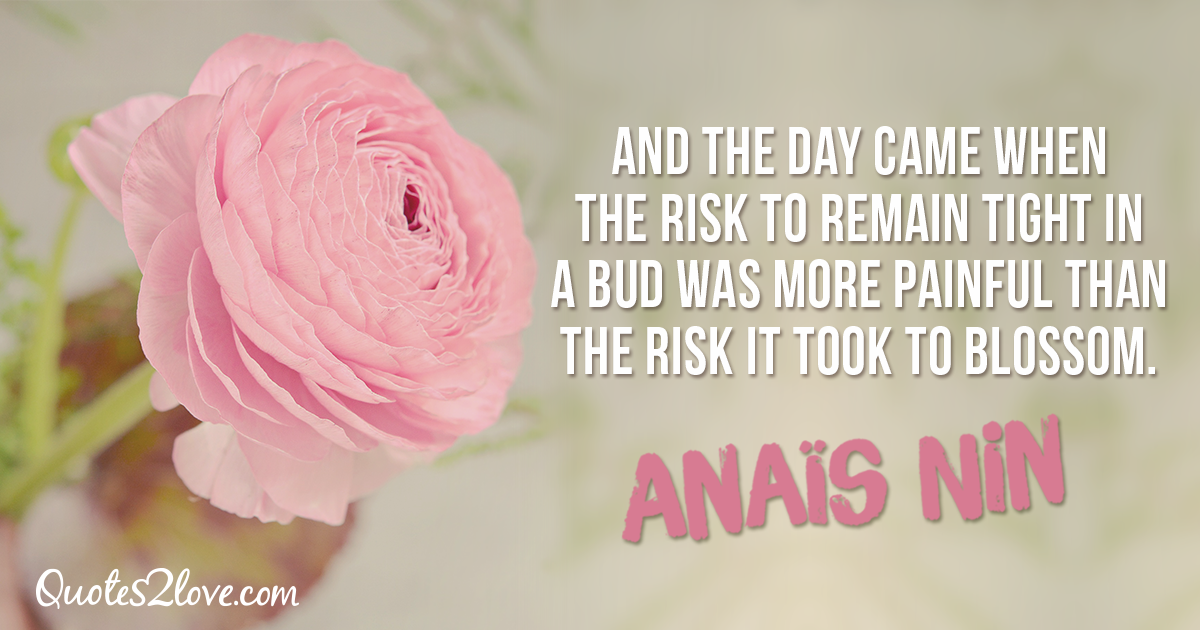 And the day came when the risk to remain tight in a bud was more painful than the risk it took to blossom. – Anaïs Nin

For you and for me the highest moment, the keenest joy, is not when our minds dominate but when we lose our minds, and you and I both lose it in the same way, through love. – Anaïs Nin 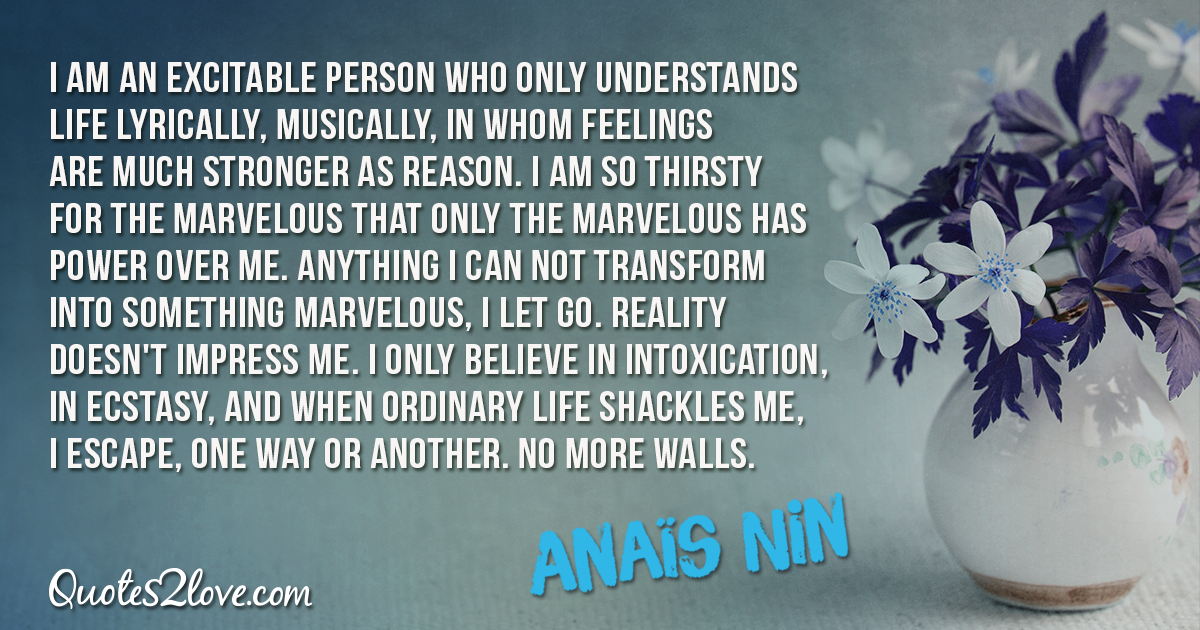 I am an excitable person who only understands life lyrically, musically, in whom feelings are much stronger as reason. I am so thirsty for the marvelous that only the marvelous has power over me. Anything I can not transform into something marvelous, I let go. Reality doesn’t impress me. I only believe in intoxication, in ecstasy, and when ordinary life shackles me, I escape, one way or another. No more walls. – Anaïs Nin

What can I do with my happiness? How can I keep it, conceal it, bury it where I may never lose it? I want to kneel as it falls over me like rain, gather it up with lace and silk, and press it over myself again. – Anaïs Nin 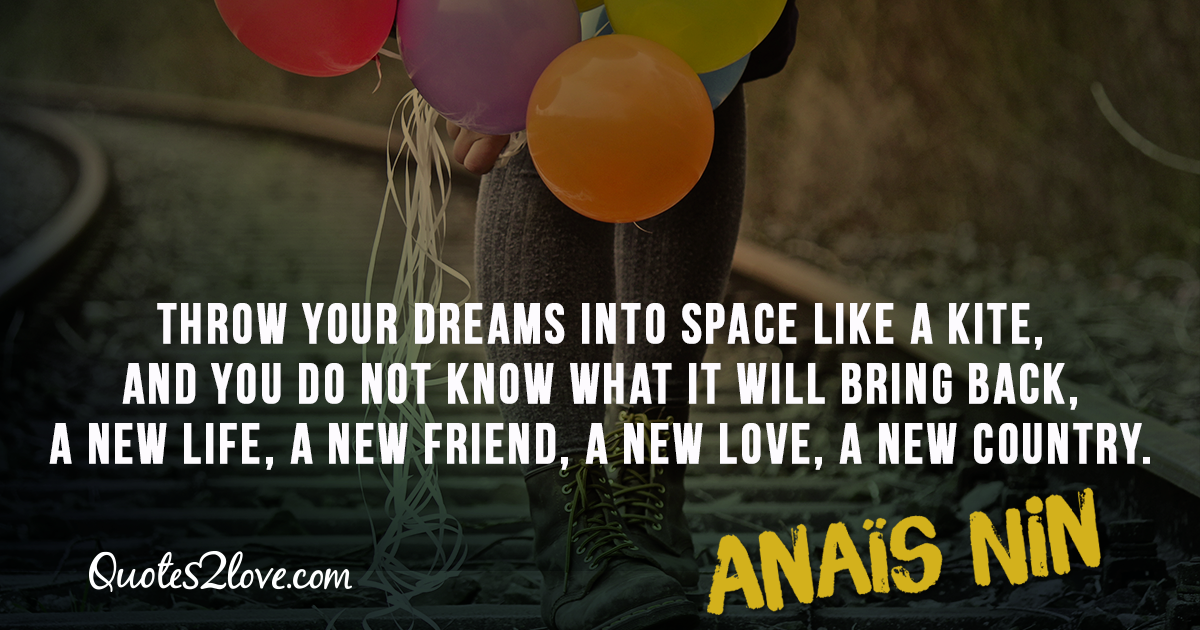 Throw your dreams into space like a kite, and you do not know what it will bring back, a new life, a new friend, a new love, a new country. – Anaïs Nin

Age does not protect you from love. But love, to some extent, protects you from age. – Anaïs Nin 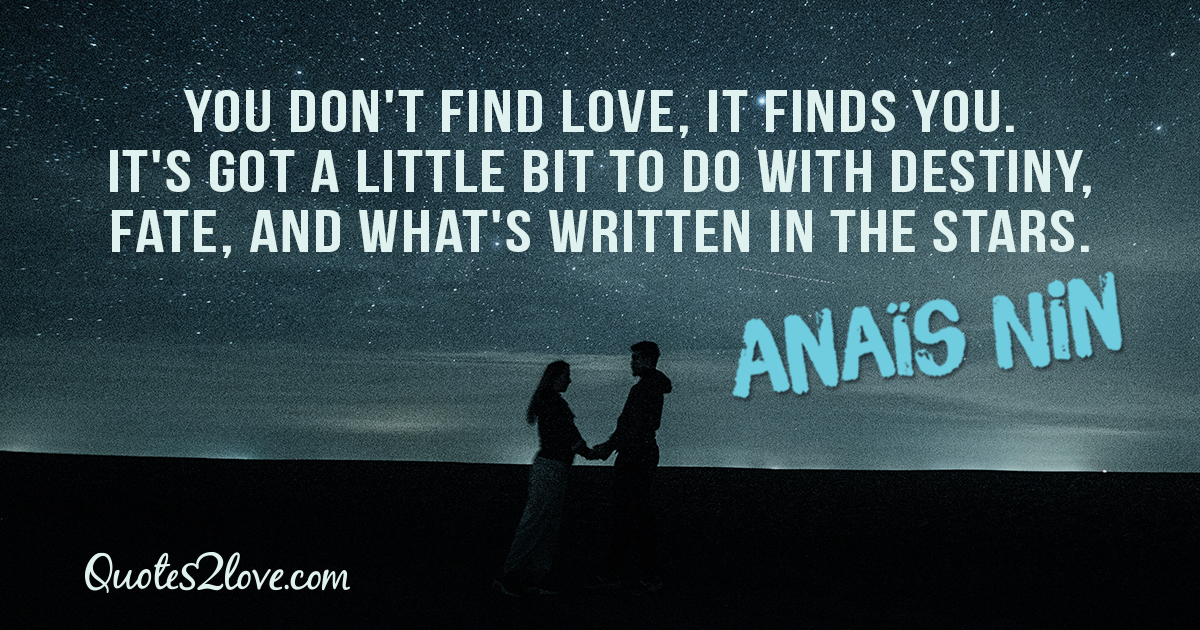 You don’t find love, it finds you. It’s got a little bit to do with destiny, fate, and what’s written in the stars. – Anaïs Nin

If what Proust says is true, that happiness is the absence of fever, then I will never know happiness. For I am possessed by a fever for knowledge, experience, and creation. – Anaïs Nin 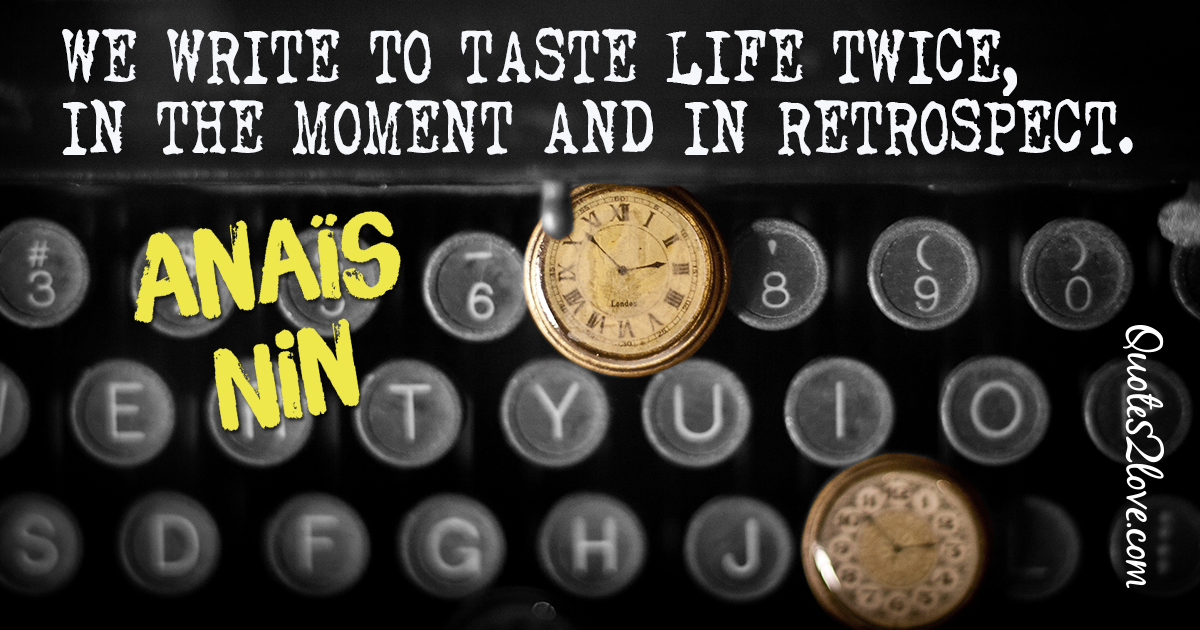 We write to taste life twice, in the moment and in retrospect. – Anaïs Nin

I’m awaiting a lover. I have to be rent and pulled apart and live according to the demons and the imagination in me. I’m restless. Things are calling me away. My hair is being pulled by the stars again. – Anaïs Nin 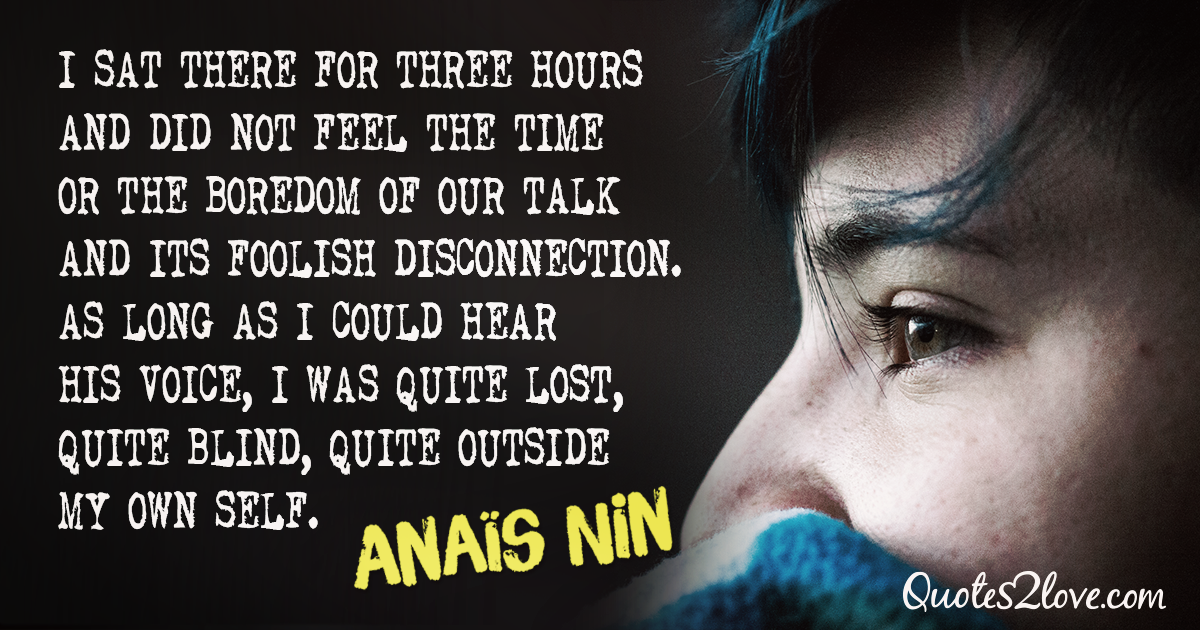 I sat there for three hours and did not feel the time or the boredom of our talk and its foolish disconnection. As long as I could hear his voice, I was quite lost, quite blind, quite outside my own self. – Anaïs Nin

At first power, power, then the wound, and love, and love and fears, and the loss of the self, and the gift, and slavery. At first I ruled, loved less; then more, then slavery. Slavery to his image, his odor, the craving, the hunger, the thirst, the obsession. – Anaïs Nin 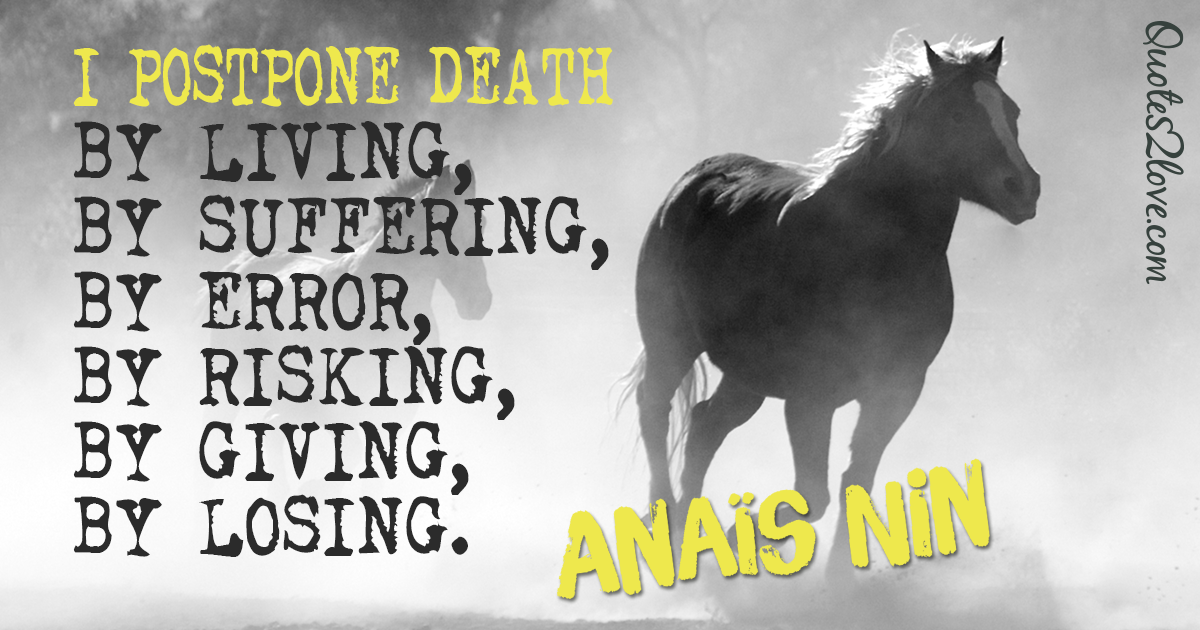 I postpone death by living, by suffering, by error, by risking, by giving, by losing. – Anaïs Nin

I am the most tired woman in the world. I am tired when I get up. Life requires an effort I cannot make. Please give me that heavy book. I need to put something heavy like that on top of my head. I have to place my feet under the pillows always, so as to be able to stay on earth. Otherwise I feel myself going away, going away at a tremendous speed, on account of my lightness. I know that I am dead. As soon as I utter a phrase my sincerity dies, becomes a lie whose coldness chills me. Don’t say anything, because I see that you understand me, and I am afraid of your understanding. I have such a fear of finding another like myself, and such a desire to find one! I am so utterly lonely, but I also have such a fear that my isolation be broken through, and I no longer be the head and ruler of my universe. I am in great terror of your understanding by which you penetrate into my world; and then I stand revealed and I have to share my kingdom with you. – Anaïs Nin 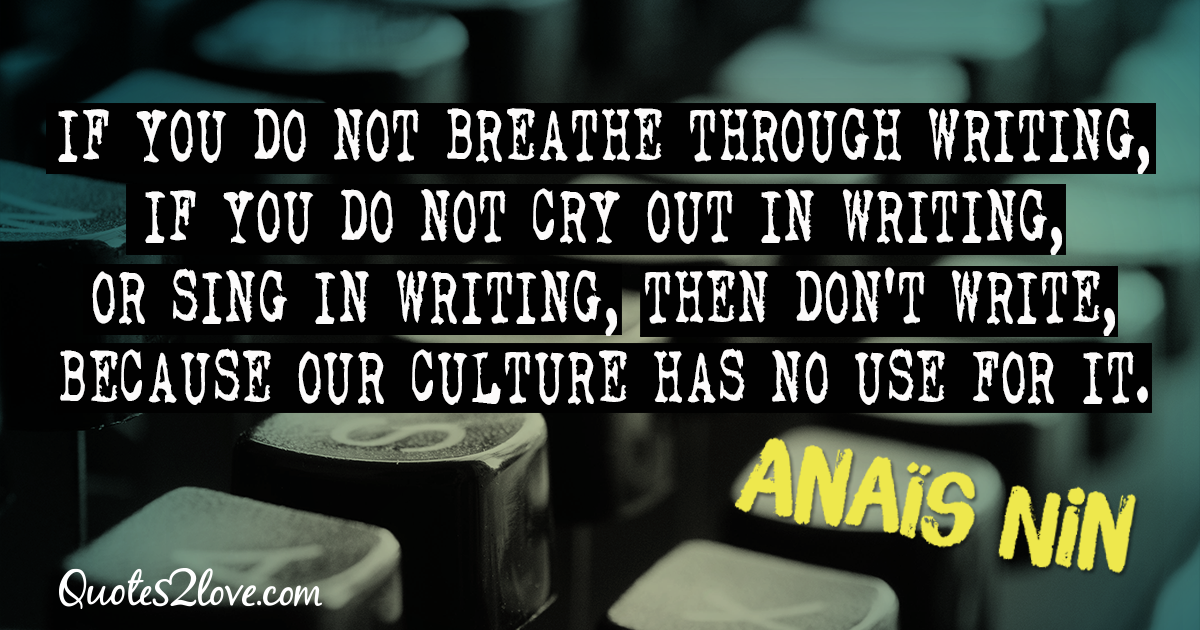 When your beauty struck me, it dissolved me. Deep down, I am not different from you. I dreamed you, I wished for your existence. I see in you that part of me which is you. I surrender my sincerity because if I love you it means we share the same fantasies, we share the same madness. – Anaïs Nin 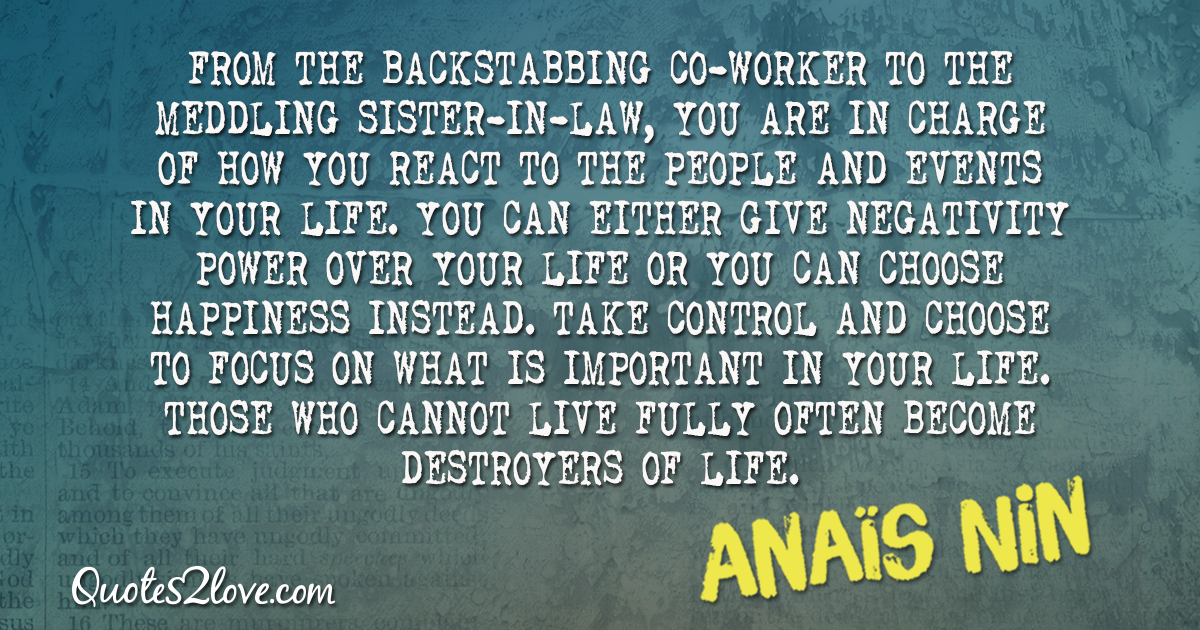 From the backstabbing co-worker to the meddling sister-in-law, you are in charge of how you react to the people and events in your life. You can either give negativity power over your life or you can choose happiness instead. Take control and choose to focus on what is important in your life. Those who cannot live fully often become destroyers of life. – Anaïs Nin

The role of a writer is not to say what we can all say, but what we are unable to say. – Anaïs Nin 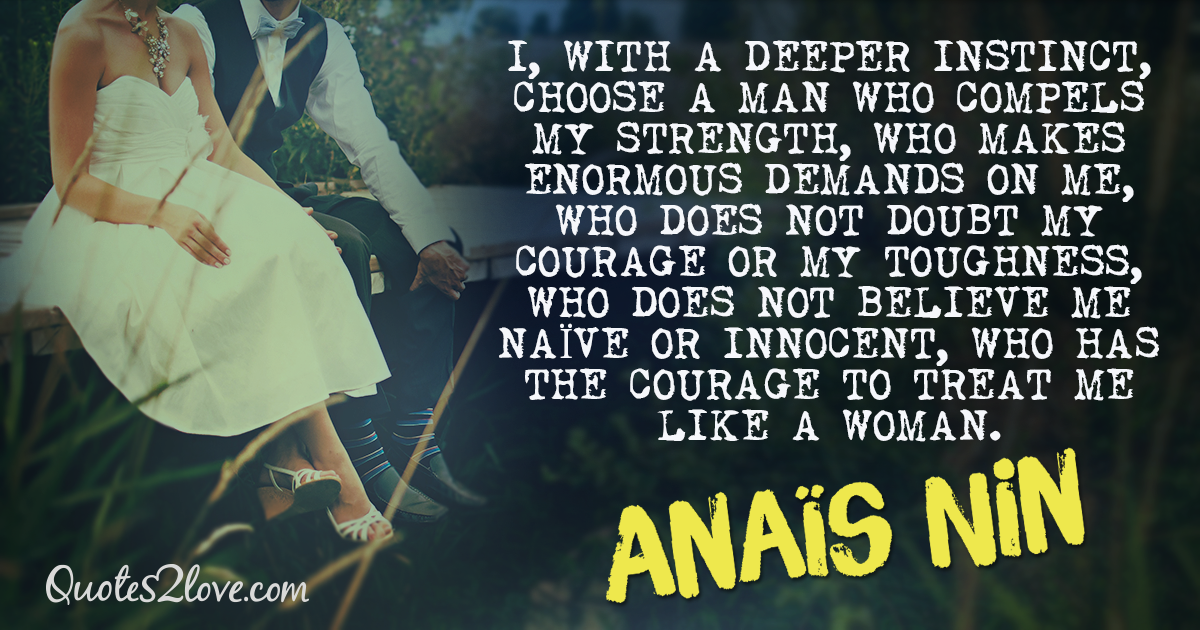 I, with a deeper instinct, choose a man who compels my strength, who makes enormous demands on me, who does not doubt my courage or my toughness, who does not believe me naïve or innocent, who has the courage to treat me like a woman. – Anaïs Nin

I have no brakes on…analysis is for those who are paralyzed by life. – Anaïs Nin