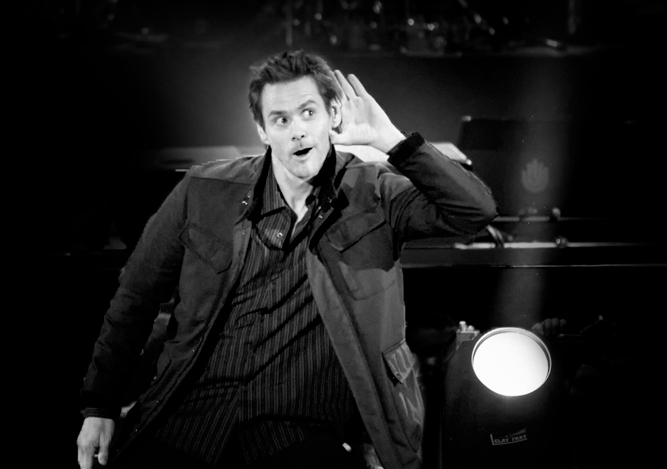 Jim Carrey is a brilliant actor and comedian famous for his hilarious comedic acts, over-the-top comedy and making people laugh. Jim Carrey might have made a career out of his funny lines and even funnier faces, but when he gave a series of speeches where he shared his bits of wisdom, like the commencement speech at the Maharishi University of Management or at Oprah’s show, the world stood and watched how this “funny man” becomes an incredibly “wise man”. Here is a collection of Jim Carrey’s most inspirational quotes that will put you back on track and inspire to pursue your life dreams even harder.

Motivational quote of the day: “You can fail at what you don’t want, so you might as well take a chance on doing what you love” (Jim Carrey)

1. On pursuing your dreams:

“My father could have been a great comedian, but he didn’t believe that that was possible for him, and so he made a conservative choice. Instead, he got a safe job as an accountant. When I was 12 years old, he was let go from that safe job, and our family had to do whatever we could to survive. I learned many great lessons from my father, not the least of which was that you can fail at what you don’t want, so you might as well take a chance on doing what you love.”

2. On overcoming your fears:

“Now fear is going to be a player in life, but you get to decide how much. You can spend your whole life imagining ghosts, worrying about the pathway to the future, but all it will ever be is what’s happening here, the decisions in that we make in this moment, which are based in either love or fear. So many of us choose our path out of fear disguised as practicality. What we really want seems impossibly out of reach and ridiculous to expect, so we never dare to ask the universe for it.”

3. On finding fulfillment in life:

“I’ve often said that I wish people could realize all their dreams and wealth and fame, so that they could see that it’s not where they’re gonna find their sense of completion. Like many of you, I was concerned about going out into the world and doing something bigger than myself, until someone smarter than myself made me realize that there is nothing bigger than myself. My soul is not contained within the limits of my body, my body is contained within the limitlessness of my soul.”

5. On the power of affirmation:

“I’ve always believed in magic. When I wasn’t doing anything in this town, I’d go up every night, sit on Mulholland Drive, look out at the city, stretch out my arms, and say, ‘Everybody wants to work with me. I’m a really good actor. I have all kinds of great movie offers.’ I’d just repeat these things over and over, literally convincing myself that I had a couple movies lined up. I’d drive down that hill, ready to take the world on, going, ‘Movie offers are out there for me, I just don’t hear them yet.’ It was like total affirmations, antidotes to the stuff that stems from my family background.”

For even more inspirational quotes about pursuing your dreams, visit 5 simple steps how to turn your daydreams into reality.

3 THINGS ABOUT LIFE EVERYONE CAN LEARN FROM PELÉ, ONE OF THE GREATEST SOCCER PLAYERS OF ALL TIME15 FUNNY BIRTHDAY QUOTES NOBODY WILL FORGET
Comments: 0